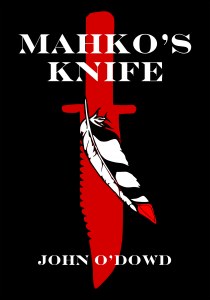 It’s been a while since I have read a suspense novel. I have read horror, and psychological thrillers like they are going out of style, but a book that is 100% suspense? Not so much.

Note to self: quit ignoring the genre.

“Mahko’s Knife” which was written by John O’Dowd was actually sent to me through his publisher (whom all of you should know by now) Scott Nicholson, and what caught my eye (as I scanned his list of review submissions) was the synopsis.

“Take Jason Bourne, give him Apache blood, threaten his family, and drop him in the Southwestern desert, and you’d have Mahko.”

Well…loving Jason Bourne and all his stellar kick-ass-ness (yes I know that’s not actually a word) I was thrilled to read a book that was claiming to be similarly structured.

The blurb is correct. Mahko is one skilled Apache, but not in that hey-look-at-me-I-can-make-bone-tools way, more the I-was-a-badass-in-special-ops-and-you-have-just-pissed-me-off-you-better-watch-your-back sorta way. When a drug war gets a little to close to home and Mahko’s son Geronimo is snatch by thugs, he makes it his mission to get him back…regardless of who gets in the way, but when his son (who is as equally and as frightfully skilled) decides he’s tired of being held hostage, he springs into action. What do you do when you have an angry drug lord after you? What happens when the hunter becomes the hunted, and what do you do when you’re stuck in the desert thousands of miles from home?

The first couple of chapters had me a little confused, jumping from several different perspectives and several different story lines with no defined plot, but luckily by about 10% in, the chaotic-ness finally settled down and the story emerged. The character development in this novel was stunning, leaving no man behind (even the most minute of characters had development paragraphs so you could understand their motive.) The majority of this novel is a chase (there are a few flashbacks stuck in for dramatic effect) but even with the immense amount of detail, (for example, explaining how the hero was planning each physical step he would take,) the flow never stalled. John O’Dowd delivered an action packed fight to stay alive from cover to cover, and as an added bonus left the reader to their own assumption in the final chapter.(This is usually annoying, but this time it was brilliantly fitting)

if you are an adrenaline junkie and enjoy the thrill of a well thought out chase then this is most definitely worth the cash.

There was an arrogant 2nd in command who had trouble walking, a girl who hated beans, boxing ring mishaps, miscalculated sleep cycles, and one hell of a torture scene that has now left me afraid of thermometers (even if I’m not a guy.)

This one is a good, relatively cheap read… get it, live it, love it…pass it on.

Happy reading my fellow Hunters and remember: you never know when you’re being watched…so be sure to close your blinds.

Why yes, I do think I’ll sit on my couch all day

And then in was over. 👎🏻 brought to by loade

In other news... #tardis #drwho #ikindaflippedout

We woke up too late this morning to hit up Frankli

No trip is complete without a stop at our favorite

Don’t you love it when I go out of town? All I d

Give me ALLLL the fish and chips!! #nodietvacaymod

When your daughter is an auditory learner and HATE

Awwww....look at my nerdy precious child and his n

All the veg! #stirfry

So...this morning I went to a routine doctors appo

Attempted to make #shakshuka tonight for the first

My family has finally agreed to play #monopoly wit