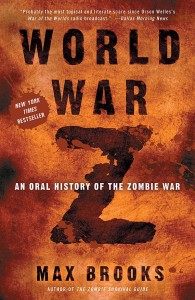 Happy Friday People! Hopefully you are out and about and doing something so fantastic that you could care less about this book review, but for those of you who are home-bound and tied down, as promised…here is my take on “World War Z”

I found this book a few months ago and plopped it into my “to read” list without much hope of it ever being released to Kindle, but a few days ago, when I finished the shortest book on the planet, I decided…hey…why not let someone else pick my book?  So I did.  I called my husband and said “Hey…pick a book!” (sounds pretty simple right?)

Apparently not so much, the man immediately picked 2 books that weren’t even out yet (HELLO!!!) and then finally landed on this…the book I had given up hope on.

“World War Z” was great! It was also unlike any other book I have ever read in my entire life.  It was…in short form, a biography written about a war that never existed.”

Now shush it! I know that you are thinking….Geez… really?? A biography… you are kidding right?  If I wanted to spend time with reality I’d turn on the Discovery Channel. (which I love by the way) but have no fear…this is the most interesting mock-bio you will ever have the pleasure of digesting.

In 1996 the world as we know it was overrun by Zombies, and for the few thousand that survived, the struggle was not without consequence.  Entire families were lost in the battles, your neighbor was suddenly hungry for your eyeballs, and your son’s little league coach suddenly became more of an arrogant ass than he already was.  The years were long and the winters were bitter.  New countries were formed from the rubble of desperation and alliances were formed that were otherwise unimaginable.

Now, while I make the premise sound a lot “funnier” than it actually is, the book was still undeniably intriguing and courageously written.  “Max Brooks” wrote in the form of interviewer/interviewee, trying to get a human perspective and timeline of the war that changed the world.  Each section is a detailed account of a singular persons experiences starting from the original outbreak and taking you to the rebuild of a torn planet.  The plot was clearly defined through each person’s story and while there was an enormous amount of detail in each “sitting” it in no way drug down the flow of the book.

There were stories from a disabled artist/neighborhood watch member, the former US Joint Chief of Staff, a human trafficker, a money hungry pharmaceutical developer, a movie director, a doctor/smuggler, a mother who ripped of a zombies head with her bare hands to save her daughter, a soldier from the epic battle of Yonkers, an asylum patient, a female soldier who was taught not to desert her post the hard way, a girl who followed her daddy north, and a former spy who knew the truth before anyone else did. (just to name a few)

My conclusion? I’m glad that my husband didn’t write it off as quickly as I did… because to miss this read would have been a shame.

Happy reading my fellow Zombies and remember: you don’t have to be the fastest person alive…just faster than the people around you!