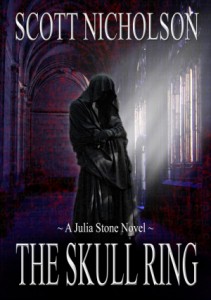 Every once and a while my “little” obsession with the written word has perks. While devouring mythical tales or getting into the mind of the mentally disturbed is more often than not a joy of its own…there are still those bright shining moments in time when I get to do the reading before everyone else, or even better…I get to do it for free.

“Scott Nicholson” emailed me last week and asked me if I would like to check out his upcoming novel “The Skull Ring” and I’m not going to lie…while I was excited to have the opportunity read it, my hopes for the novel were…how would you say it… drastically less pronounced?

I had never; in the hundreds of books I’ve read, or the hours I’ve spent staring at shelves, heard of this author, so when I sat down this weekend…Kindle in hand and an Olympic pool sized cup of coffee perched on the table in front of me, I smiled; when I realized that NOT knowing this author was a mistake.

Julia Stone is a basket case…literally…she spends every waking moment trying not to be pulled into the throws of a full out panic attack, and annoys local police on a daily basis with calls about monsters under her bed and mysteriously unlocked doors. After years of therapy and a not so gentle push from the man that claims to love her; Julia packs her stuff and moves to the mountains. All is well with fresh mountain air right? Wrong. Just when Julia thinks she’s starting to heal from her newly acquired personality disorder her world is upturned into a shambled mess of disappearing pets and itty bitty baby bones. Is Julia really crazy or is she stuck in the real life version of Deliverance?

“Nicholson’s” writing was complex, weaving several plot lines into 1 major story and… pulling it off (which I have to admit…some authors just lack the ability to do) His knack for writing “crazy” was so detailed it had me wondering if he himself had schizophrenic tendencies, and the cliffhanger scenes, that we all dwell on in a novel of this genre, were carefully and masterfully crafted leaving the reader guessing and on edge.

There were creepy crawl spaces, batty old neighbors who define the word nosey, self matriculating wooden blocks, a clock with a mind of its own, a sketchy handyman, and 1 spectacular chase through the woods.

Spend so time with the creeps….get it, live it, love it…pass it on.

Happy reading my fellow Crazies and remember: Check the boots…it’s always about the boots!