Happy Thursday! Here’s a new one from the author of Stardust and Coraline;  “Neil Gaiman” Hope your little humans enjoy it.

Happy reading and remember, when THIS worlds got you down…pick up a new one. 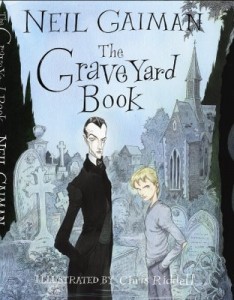 In The Graveyard Book, Neil Gaiman has created a charming allegory of childhood. Although the book opens with a scary scene–a family is stabbed to death by “a man named Jack” –the story quickly moves into more child-friendly storytelling. The sole survivor of the attack–an 18-month-old baby–escapes his crib and his house, and toddles to a nearby graveyard. Quickly recognizing that the baby is orphaned, the graveyard’s ghostly residents adopt him, name him Nobody (“Bod”), and allow him to live in their tomb. Taking inspiration from Kipling’s The Jungle Book, Gaiman describes how the toddler navigates among the headstones, asking a lot of questions and picking up the tricks of the living and the dead. In serial-like episodes, the story follows Bod’s progress as he grows from baby to teen, learning life’s lessons amid a cadre of the long-dead, ghouls, witches, intermittent human interlopers. A pallid, nocturnal guardian named Silas ensures that Bod receives food, books, and anything else he might need from the human world. Whenever the boy strays from his usual play among the headstones, he finds new dangers, learns his limitations and strengths, and acquires the skills he needs to survive within the confines of the graveyard and in wider world beyond. (ages 10 and up) -–Heidi Broadhead
From School Library Journal

Grade 5–8—Somewhere in contemporary Britain, “the man Jack” uses his razor-sharp knife to murder a family, but the youngest, a toddler, slips away. The boy ends up in a graveyard, where the ghostly inhabitants adopt him to keep him safe. Nobody Owens, so named because he “looks like nobody but himself,” grows up among a multigenerational cast of characters from different historical periods that includes matronly Mistress Owens; ancient Roman Caius Pompeius; an opinionated young witch; a melodramatic hack poet; and Bod’s beloved mentor and guardian, Silas, who is neither living nor dead and has secrets of his own. As he grows up, Bod has a series of adventures, both in and out of the graveyard, and the threat of the man Jack who continues to hunt for him is ever present. Bod’s love for his graveyard family and vice versa provide the emotional center, amid suspense, spot-on humor, and delightful scene-setting. The child Bod’s behavior is occasionally too precocious to be believed, and a series of puns on the name Jack render the villain a bit less frightening than he should be, though only momentarily. Aside from these small flaws, however, Gaiman has created a rich, surprising, and sometimes disturbing tale of dreams, ghouls, murderers, trickery, and family.—Megan Honig, New York Public Library
Copyright © Reed Business Information, a division of Reed Elsevier Inc. All rights reserved.