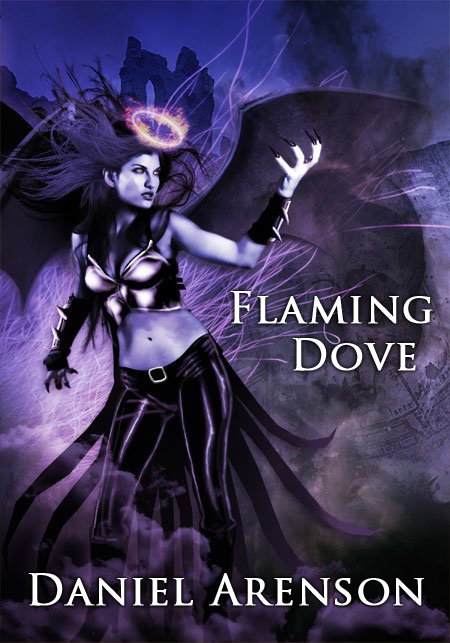 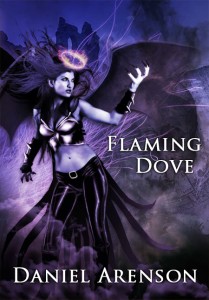 When I was a teenager I was fascinated by angels.  Not the puffy-winged-halo-sporting type, more the Archangel-wrath-of-God type.  The fact that there was a whole army of sword wielding higher beings blew my mind.  The more I read, the more I needed to read, and before I knew it I was knee deep in biblical reference material and spouting angelic tales to any poor soul that would listen. Now… like every other one of my unique (and sometimes warped fascinations) my futile need for warrior-angel information wained and I moved on,  (If I remember correctly Al Capone was next on the list) but one thing is forever certain; once a junkie always a junkie. That being said, I will ask you now to imagine my excitement when I read the blurb for Daniel Arenson’s new novel “Flaming Dove” and discovered it is basically the literary version of “Avenging Angel Crack.”

Life on Earth hasn’t been the same since Armageddon.  A battle that was supposed to bring peace and happiness instead brought confusion, desolation, and for Laila a whole lot of anger.  Being the daughter of an Angel, and the rape victim spawn of a Lucifer Laila, (more than anyone,) finds herself at a loss.  Not wanting to take sides in the inevitable battle for Earth’s holy possession she roams the woods like the outcast she has unknowingly made herself. But sometimes hiding is not enough.  As the armies of Heaven and Hell search for their pawn, Laila finally realizes something… until she can accept her demon/angel ways, she will never be able to accept her fate in the history of the world.

Having read (and reviewed) Arenson’s work before I was almost certain I would enjoy it. I am no stranger to fantasy (duh) and Arenson (more than most) has a genuinely unique way of storytelling, but even with the expected rapture, the quick reading, and unwillingness to put my Kindle down what I didn’t expect was to: gasp, sigh, grit my teeth, cuss my Kindle and cry.

This was not just a story about an emotionally lost half-breed girl. It’s was more than epic battles and avenging angels.  It was the discovery of ones self, the inner battle between good and evil. It was about accepting our fates, understanding our future, and blazing our own paths to happiness… regardless of our ancestry. This was a story about choosing your own way of life.

Now… I’m sure your next question is “Misty, how in the hell can you wrap all of that up in 294 pages?”  and to that I say “It’s simple.” Perfectly executed inner dialogue. Off the charts characterization, and battles so intense that even the smallest of deaths left a dent in the reader’s armor.  If there were flaws I failed to notice.  If there were holes, I must have taken a different path, because to me… “Flaming Dove” is what a fantasy novel should strive to be.

Happy reading my fellow Kindle-ites and remember: Michael may be made of stone, but in the end… everything can be broken.

One thought on “Dear Michael, I’ll Love You.”