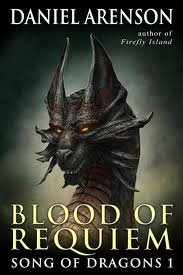 The time in which I bore you to death with my over-analytical mind and unabashed love for treks through the woods. That’s right… it’s a fantasy novel!!!! *does a somewhat retarded looking leg kick*

It has been a while since I read a good “you destroyed my family now I must take vengeance on you” novel and since Daniel (you might as well get used to that… there’s no way in hell I’m calling him Mr. Arenson) pretty much guaranteed me his soul (and a working right arm) to review “Blood of Requiem,” I had to agree. (You have no idea… I really need that right arm.)

Anywho.. before I go on a some ridiculous rant (which you will most likely skim than read) let me share with you what this book, (with the breathtaking cover) is all about.

“Long ago stood the kingdom of Requiem, a land of men who could grow wings and scales, breathe fire, and take flight as dragons. Requiem ruled the sky.

But Dies Irae, a tyrant leading an army of griffins, hunted Requiem’s people, burned their forests, and shattered their temples. Requiem fell. This ancient land now lies in ruin, its halls crumbled, its cries silenced, its skeletons littering the burned earth.

In the wilderness, a scattering of survivors lives in hiding. The griffins still hunt them, and every day promises death. Will Requiem’s last children perish in exile… or once more become dragons and fly to war?”

Fantasy novels are epic…heart-wrenching, and ultimately designed to test the wills of all involved.  This is what makes them so engaging, and also one of the more difficult genre’s to write. To be honest,  there is rarely (if any) “actual” history involved when piecing these stories together, and 99% of the time the worlds created are exclusively unique, eliminating the need for extensive research, BUT maintaining a certain level of drama while at the same time “building” a world can be daunting, and if an author lacks experience, (or a significant amount of coffee,) their writing can sometimes appear stunted.

Why does this matter…?

Well… we are well aware by now that Daniel is a very talented fantasy author, (at least according to me) and has plenty of experience, but that doesn’t mean that every once in a blue moon his writing doesn’t lack the “golden shimmer of greatness.” What it does mean however, (deep breath) is that Daniel knows how to recover.

For example, below I have offered you two passages; from two very different times in the book.  In the first, Daniel seems a little off balance, like he really wants to make the passage shine, but he isn’t quite sure how, instead it reads as an average descriptive paragraph for an average everyday book.  In the second passage however (which comes at about the 60% mark) you can see that he finally found his footing, and created an awe worthy, visually captivating paragraph that makes his story come to life. This (naturally) is the point in the book where I finally connected. *ding – light bulb*

-Towards to Beginning: “Forget Gloriae for now, he told himself. Benedictus needs me. Kyrie shot between clouds, zooming, tumbling, somersaulting.  He flew with eyes narrowed, flew like never before, dazzling the griffins, spinning so fast, they barely knew where to follow.  As he flew, he roared in pain and pride, for his king had returned.”

-Slightly past the mid-way point: “The blaze hit the griffin, pushing it back.  It tumbled a few feet, then again flew at Benedictus.  It looked like some roasted animal now, smoking and furless, its skin red and black and blistering.  The beak was open and screeching, the rider writhing and screaming, a ball of fire and blood.  Benedictus howled and lashed his tail, driving its spikes into the griffin, and finally it tumbled toward the ground.  It fell like a comet, still screeching, until it hit the ground and was silent.”

And since we are on the topic of disjointedness.. the dialogue also felt a tad flat in the forefront of the book (very un-Daniel like I might add) but again, he made a startling comeback once his characters were fully feted out and took on a life of their own.

Anyways, on to what I loved about “Blood of Requiem” (partially because I want you to understand that this was a solid start to a promising series, and partially because I think Daniel may have a gun to his head right now.) The dragons. *roars into the air like a moron*

I LOVE dragons, and this is one area where Daniel did NOT let me down.  Their descriptions were breathtaking, their actions intoxicating, and though they huffed and puffed (literally) at each-other when irritated, this only endeared me to them more.  Most dragons are written from the “callous” angle, or at the very least… one that makes them appear gruff and unmoved, but Benedictus and his family of shimmery beast were not.  Instead Daniel brought their weakness to light, highlighting their prideful stubbornness but also their damaged souls.  In short… he kept them human, making their flaws beautiful instead of shameful.

As for the rest of the characters, (Dies Irae and Glorea specifically) I hated them.  Not from  a writing aspect mind you, but full fledged hatred that one might have against…say…their neighbor who throws grass seed in their flower beds. Which… only goes to show how far a few well written tirades can go.

So, what is my overall verdict? Well.. to be honest, this was not my favorite book of Daniel’s, BUT it has outstanding promise, AND… luckily for you (since I’m soooo freaking behind on reviews right now) the next 2 books are already out, so there is no waiting to see what happens next.

If you like fantasy, take a chance.  If you are more the “we’re going to the chapel…” type, this may not be the best book for you.

Happy Reading my fellow Kindle-ites and remember: Anger is like fuel… one little spark and shit will hit the fan.

One thought on “Flight or Frenzy”