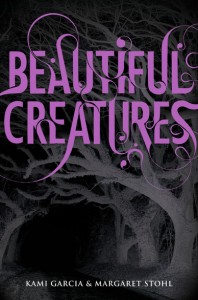 “Beautiful Creatures” was fascinating, and not it that wow-it’s-another-cool-book-about-witches-and-curses way, more the, I-can’t-believe-I-just-read-a-book-that-incorporated-witches-incubuses-voodoo-flashbacks-hurricanes-and-history-lessons-concerning-the-“War of Northern Aggression” way. (holy crow that was a mouth full.)

Unlike the majority of YA Fantasy novels out there, this little gem was actually written from the guys perspective. His name is Ethan Wate and he is popular. That is of course until the beautiful (in a Goth way) Lena shows up and shatters his hum-drum small town world into a million little fragmented pieces. His mother is dead, his dad is a recluse and his days are filled with basketball, annoying High School stereotype girls, and a maid/voodoo priestess named Amma who absolutely does not tolerate tardiness or words like “heck” and “hell.”

Lena on the other hand, is dark, and shy, and mildly psychotic…or at least that is what the rest of Stone Wall Jackson High thinks; but to Ethan, she’s the girl that he has been seeing in his dreams. Literally. His nightmares are constant, and this “mysterious girl” who shows up one day, driving a hearse and wearing a necklace made of trash, is indeed the girl that keeps falling from his grip in his various different nocturnal scenarios.

Both are faced with challenges they never knew existed, (Can a Caster and a Human really be together?) both are forced to look long and hard in the mirror and see who they REALLY are, (Am I Dark or Light? ) and both of them, despite there better efforts are unable to stay away from each other. (Insert typical teenage angst here.)

There are moments of soapy horror, hypnotic green eyes, a necklace that is actually a portal to the 1800’s, 3 crazy confederate sisters who are obsessed with squirrel hygiene, telekinetic grave robbing, and 1 very crazy ass mother who likes to steal bodies and play with fire.

The writing was average, but intriguing, the plot was enthralling, and the ending was sad but fitting.

Good read, I’m happy that the Kindle faeries decided to treat me with it.

Happy reading my fellow Casters and remember; The right thing and the easy thing are not always the same.

One thought on “I Wish My Ipod Was Magical!”