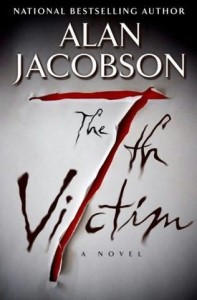 For those of you who have been keeping track, you know its been a while since I’ve read a novel like this, (The last being a Temperance Brennan Novel) after reading the genre for 4 straight months, book after book, my mind/sanity thought it was necessary to take a break from serial killers and their maniacal crime scenes, so I did… , and in turn wrapped myself in the more mellow reads of the paranormal. (Ok…not all of them were tame…but trust me when I say they are a damn site less descriptive)

It’s hard to pinpoint, in my cynical mind, exactly what I expected to find when first deciding to read “The 7th Victim”, an ok novel with an interesting plot maybe? or maybe a decent copy cat of the greats I have already read? Who knows…but what I didn’t expect to find actually shocked me more than I could have anticipated.

Now, while most of y’all are cringing at the fact that I just confessed to missing the company of fictional serial killers, let me assure you that it’s nothing more than my love for the game of “Clue”

I love a good mystery, the who-did-it-where-did-it-happen-who’s-going-to-be-next kind, and while most books will have snippets of the unknown, psychological thrillers ARE the unknown.

“Karen Vail” works for the FBI. As a profiler she surrounds herself with the seedy underground of ax murders and psychopaths on a daily basis.

After months of seemingly dormant action her world suddenly turns into a whirlpool of chaos, when a previously un-captured crazy known to the media as “Dead Eyes” returns to the scene with several more grizzly murders.

While trying in vain to capture a killer who decides to personally taunt her through break-ins and creepy self-destructive emails, Vail’s personal life takes a hit as well. Her ex…an abusive waste of space… throws her under the bus and charges her with assault.

Struggling to keep herself, her son, and her career alive she spends every waking minute building her own walls of protection while trying to break down everyone else’s.

“Alan Jacobson’s” writing was masterful, artfully inserting twists and turns that not even and avid thriller reader, like myself, could see coming. The plot flowed freely and his attention to detail was undeniable, and he is now, without question, a new found force to be reckoned with in my world of “who did it?”

There were fake badges, egotistical has-been agents, missing limbs, peep holes, moments of self realization, and several OMG! moments ending in one hell of an underground chase.

If you are like me, don’t mind gruesome descriptives in your quest to peg the killer, this one is worth every cent, but if you like the softer side of things and prefer a safer less bloody world, steer clear cause this one is covered in it.

Happy reading my fellow Agents, and remember: Even the biggest of us still need barf bags sometimes.