With so many new and enthralling young reader novels springing up I feel that sometimes we forget about the classics…so in today’s additional of “It’s a Tween Thing” I thought I would bring you one of MY favorites…an oldie but goodie. I loved this book as a child and hope that your slightly smaller humans will be as fascinated by the journey as I was.

Happy Reading my fellow Kindle-ites and remember: When THIS world’s got you down…pick up a new one.

A Wrinkle In Time 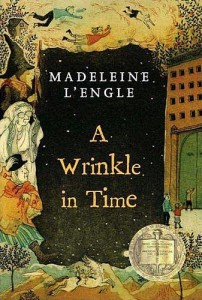 It was a dark and stormy night; Meg Murry, her small brother Charles Wallace, and her mother had come down to the kitchen for a midnight snack when they were upset by the arrival of a most disturbing stranger.

“Wild nights are my glory,” the unearthly stranger told them. “I just got caught in a downdraft and blown off course. Let me sit down for a moment, and then I’ll be on my way. Speaking of ways, by the way, there is such a thing as a tesseract.”

A tesseract (in case the reader doesn’t know) is a wrinkle in time. To tell more would rob the reader of the enjoyment of Miss L’Engle’s unusual book. A Wrinkle in Time, winner of the Newbery Medal in 1963, is the story of the adventures in space and time of Meg, Charles Wallace, and Calvin O’Keefe (athlete, student, and one of the most popular boys in high school). They are in search of Meg’s father, a scientist who disappeared while engaged in secret work for the government on the tesseract problem.

Father is missing! His top secret job as a physicist for the government has taken him away–but where?–and how? Meg and her younger brother, Charles Wallace, set out with their friend Calvin on an exciting adventure through time and space to search for him. With the help of the mysterious Mrs. Whatsit, Mrs. Who and Mrs. Which, the youngsters learn to expect the unexpected as they move in the fifth dimension known as the “tesseract”.

With this award-winning story, Madeline L’Engle has captivated millions of readers throughout the world. Her universal themes of courage, perseverance, and love are interwoven with imagination and suspense. A Wrinkle in Time, published in 1962, won the distinguished Newbery Medal for children’s literature in 1963.

One thought on “Hiccup To Another World”