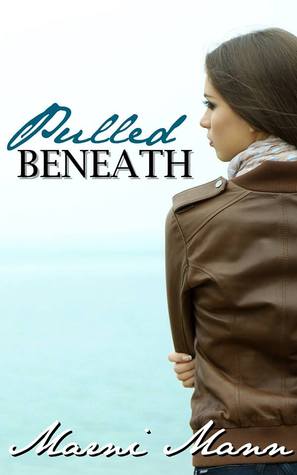 There is this quote by poet Fernando Pessoa that says:

“In order to understand, I destroy myself.”

At one point in my life, I thought this was the only genuine way to live. Self-destruct…learn the lesson. After a string of bad choices, with equally bad consequences, I finally realized that that way of living was incredibly unhealthy. Despite the lessons I learned. (And believe me…they were vast.) But that’s life isn’t it? A series of results based solely upon our choices. Some of us are optimist. We make lemonade. (And all that jazz.) But the rest of us, we find it difficult to get out of our own heads. We need help. And not from the optimists, (who see rainbows and fluffy puppies behind every f’d-up situation) but from others who have been where we’ve been. Stood where we’ve stood. Walked in matching shoes.

“Pulled Beneath” by Marni Mann is a book that lives inside the self-destruction of a pessimist. It wraps itself around the complexities of a irreparably broken family. It makes examples of drugs, deception, sacrifice, heartbreak and resilience. It’s the story of not one, but two people who need the experience and understanding of a like soul to save their own.

What happens when you uncover years of secrets and find out everything you thought to be true was a lie?

Drew Stevens finds her world turned upside down when her parents are brutally murdered. Soon after, she learns she inherited a property in Bar Harbor, Maine, from recently deceased grandparents that she believed had died when she was a baby.

Drew travels north to settle her grandparents’ estate, but finds more questions than answers as the truth starts unraveling. What she didn’t expect to find was Saint, whose reputation is as tumultuous as his past. But the very thing that brings them together is the same thing that keeps them emotionally caged.

With Saint’s scars so deep and Drew’s so fresh, can the pair heal from their painful wounds or will they be pulled beneath the darkness of their pasts?

I know what you are thinking after reading that synopsis, “Pulled Beneath sounds like every other NA book on the market.” (Which translates to: “This novel is going to be predictable.”) And in some cases you are correct. Yes, there are damaged people who (surprise surprise) find solace in other damaged people. (NA 101.) Said people are also incredibly hot. (This is fiction…everyone is hot.) There are lies, and there will be no comfort until all are revealed and dealt with. (Again…been there done that.) But what sets “Pulled Beneath” apart from the other NA ranks? The fact that (despite what you might read in the prologue) there is very limited sexual contact. Angst out the wahzoo but detailed sexual exploitation? It’s refreshingly absent. Also, the lead character was NOT a victim of a sexual crime. Instead she is the victim of unfortunate reality. Her parents were murdered. (By some random tweeker who saw some quick cash as an opportunity.) And while that alone can be hard to handle, she soon discovers that EVERYTHING she ever thought to be true about her upbringing is a bald face lie.

The mystery of Drew’s family is the focal point of this novel, and rightfully so. It (not the romance between Drew and Saint) is what drives the destruction in Drew’s life. She doesn’t know what (or who) to believe, and though Saint is part of her emotional anxiety, he isn’t the REASON for her downward spiral (just a bi-product.) In fact, he often maintains a strong silent presence as apposed to the uber alpha male smack down that often graces the pages of today’s NA. (Though admittedly…he does have one or two Hulk moments.) In “Pulled Beneath” the title of “Alpha Dog” actually goes to Drew’s dog. A constant presence in her life since the passing of her parents AND a strong character in this novel. (Despite the fact that he walks on all fours and tends to slobber instead of speak. )

Now, with all the good there does come a tad of bad. (Sorry, it’s inevitable.) The most notable being that the book does have a few timing hiccups. More than once I found myself wanting to skim. I didn’t, but the urge was there. That’s never a good thing. Also…I think one of the big reveals (aka: her father) was glossed over for the more predictable plot line. (Drew and Saint.) I would have loved to learn more about him, and in turn…Drew’s aunt. Who played such a small part she was practically a paranormal entity.

All things considered however…I found myself enjoying the differences in “Pulled Beneath.” I didn’t feel like I was reading a story I’ve read a thousand times. (*high five Mann*) And Mann’s ability to create tension between a slew of VERY different characters added an unforeseeable (and delightful) amount of depth.

If you enjoy New Adult, Chick Lit, even general Romance…you will enjoy this.

My vote: Worth the money.

Happy Reading my fellow Kindle-ites and remember: “The first step toward change is awareness. The second step is acceptance.” – Nathaniel Branden