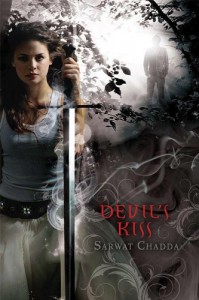 I love books that are filled with action!! A little romance stuck in the middle is great (Duh, I’m a girl) But the epic fighting scene are what keep me reading. Give me grade A crises situations, give me kung-fu and flying daggers, give me a 15 year old girl with an attitude and a fondness for shiny swords, and I am 1 very happy girl.

I have read an ungodly amount of literature focused on demons and the undead, but I had never (until now of course) read anything that focused on the Knights Templar, which is exactly what “Devil’s Kiss” was about.

I am happy to say that I LOVED IT.

It is, without a doubt the best “action” book I have read since the “Mortal Instruments” series, and I could not put it down (trust me…I tried… It just wasn’t happening)

Meet Billi, our heroine, at the age of 10 she was thrown head first into a life of unimaginable evil. Her father, (who is a completely psychotic work-a-holic,) is the leader of the sword wielding, demon catching, prophecy smashing Knights Templar, who for a lack of an easier explanation, is an all boys club formed under the church to destroy the evil us mere humans are unable to see right in front of us. (demons, vampires, ghouls… you get the point) Billi, being the only girl is not only compared to the men, but expected to be better than them. The only problem, or course, comes when Billi would rather live her life as a normal girl than the bad ass with a sword her elders expect her to be. So… she does what every other teenager does…she doesn’t listen. She fights with Kay (her boy … friend) who just happens to be an Oracle. She ditches her responsibilities to meet a cute boy for tea, and in the end…has to suck it up and save the world.

“Chadda’s” writing was superb, there was not a single moment when I was subconsciously rambling to “Get to the point.” His plot was well thought out, his facts were accurate, and his ability to take one piece of Templar history and form an entire story around it was…to say the least… impressive.

There were overgrown boys who always seemed to be eating, ghouls who looked like supermodels, lessons in subway safety, lots of flying silverware, a fight scene that will leave you appreciating the fact that you are on solid ground, and 1 very chilling moment of truth including 1 of the aforementioned boys and a sword handcrafted by the devil himself.

“Chadda’s” next book (the follow-up to “Devil’s Kiss) isn’t scheduled to be released until sometime in 2010, but it is pretty safe to assume, I will snatch it up the second I see it.

Happy reading my fellow Templar’s and remember, prophesies and perceptions are in the eye of the beholder, maybe you should look at your problems from all angles, not just the right one.