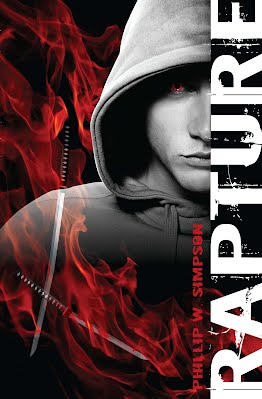 Pet Peeves of the Publishing Industry

In the course of my writing career, I’ve had almost 50 books published by mainstream publishers. Publishers include Penguin, Macmillan, Pearson, Oxford University Press and Cengage. These, admittedly, are mostly educational books for children and books to help teachers teach the writing process.

In terms of my commercial fiction, I’ve recently become an indie writer. My Rapture Trilogy was published by Pear Jam books, a small publisher based in New Zealand. I got my rights back in January, 2013 and decided to go Indie because of the trouble a small publisher faces in terms of distribution. They struggle to get their books in mainstream bookstores. Many of these bookstores are reluctant to take on stock not produced by a major publisher.

Not only that, but my books are difficult to buy in print where they need to be – the U.S.  The Rapture Trilogy is set in the States and I believe the content appeals more to American audiences than any other. It’s also difficult to get reviews in popular review spots such as newspapers, magazines etc. I had many reviews by bloggers and in all fairness, bloggers target my demographic much better. It’s a fantastic way to get word out to potential readers. But still – it would be nice to see my books in the review pages in the Sunday papers.

There are so many good books out there by small presses and indie authors but many people have never heard of them. I believe the industry is changing however – for the better.  Indie and self published authors have a lot more control now, especially with the advent of the e-book and the ability of these authors to sell their books on-line. Mainstream review sources are starting to sit up and take notice but it’s still very difficult. Kirkus, for instance, offers a review service for Indie authors but it’ll cost you. From memory, I think it costs around $500 for a Kirkus review. I know it’s impractical for them to review every book but it would be nice if they offered the same free service they offer to mainstream publications. Perhaps when a book has received enough attention, Kirkus could produce a free review. Maybe the criteria could be a certain amount of reviews from bloggers or a certain amount of ratings from sites like Goodreads. Food for thought.

Regardless, I have fully embraced my Indie status and I’m looking forward to publishing my next few books myself. With Apocalypse, I will have five novels available as e-books. I’ve got one chapter book that I want to put up as well as two picture books. In addition, I’m currently working on my sixth novel. It’s going to be a busy year!

The Rapture has occurred – the end of the world. The faithful have risen up to Heaven. Those left behind are in a living hell. Armed only with his swords and his wit, a teenage boy wanders this post-apocalyptic world alone, separated forever from everyone he loves. Cursed by his demonic heritage, he must now embark on a quest that will take him across the US to the City of Angels.

Add Rapture to your Goodreads shelf!

As soon as this thought entered his mind, it was interrupted by a demonic presence to his left. A cluster of Lemure surged out of what had once been the local coffee house, screaming as they advanced. Sam sprinted around a wrecked SUV to give himself some breathing room, drawing both swords.

He swung around to his left, still at full stretch. Whether by good luck or by displaying a higher than usual level of intelligence, three of the Lemure hadn’t fallen for the ploy. They met him on the other side of the SUV, running as hard as he was. Sam didn’t even pause. He struck high then low and spun around to deliver a double blow to the third Lemure. All three turned to ash in his wake.

He kept sprinting, skirting around the wrecks in the middle of Main Street, heading east. It was opposite to the direction he wanted to head in but he would double back later in order to confuse his pursuers.

Sensing that the demons were falling behind, Sam slowed to a fast jog. He could keep this pace up for hours if he needed to. Before the Rapture, he had often run into the Rockies and back before the sun had even snuck up over the horizon. Night-time was when he always trained, away from prying eyes. He always felt stronger in the dark. Hikari had told him that his night vision was much better than any other humans, something he had suspected when he realized he could see almost perfectly in all but the most absolute darkness.

It was just as well because now the only light came from the moon, which was hardly a great source of illumination. Normally, street lights, the frontages of residential homes, the odd shop open for a late night and the occasional car would provide ample light for the average resident. It was odd running through the small town like this, guided only by the malevolent red glow from above.

Disturbingly, despite his injuries, Sam felt even stronger right at that moment, almost as if the moon was energizing him. He looked up, hoping to catch a glimpse of a star in the now cloudless sky. There were none. Had been none since the Rapture. The stars, once beautiful and sparkling in the clear country air, had all fallen. Where they had landed, Sam had no idea. He just knew that they weren’t in the sky anymore.

Suddenly a shadow fell across the moon, a strong wind buffeting him from above. He’d sensed the presence of the Astaroth but he was far, far too late. Too late and too slow. Cursing himself for his lack of concentration, Sam attempted to roll but felt something lift him off his feet with a powerful jolt. It was the Astaroth alright. Clearly, those wings weren’t for show, he thought wryly as the Astaroth slowly gained height. Luck had been on his side though. Instead of those mighty talons piercing his skin, they had merely jagged his backpack.

Then Sam remembered what were in his hands. What had been in his hands all the way down Main Street. His swords. He swept both up at the same time, each aiming for a different leg, and felt a savage surge of satisfaction as the iron weapons both connected and bit deeply. The Astaroth roared so loudly that, if Sam had been able to, he would’ve covered his ears.

Instead, he found himself falling. Surprisingly quickly. He thought, rather belatedly, that he hadn’t actually planned this out very carefully.

The ground rushed up to meet him.

Where To Buy Rapture 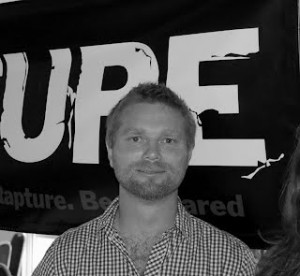 Phillip W. Simpson is an author of mostly children’s books – both fiction and non-fiction.

As well as being a writer, he is an elementary school teacher. Career highlights include being in the army, gaining a Masters in Archaeology, owning a comic shop, becoming obsessed with martial arts and oriental weapons and turning down a job at the British museum.

His YA novel RAPTURE (the first in the Rapture trilogy) was released Sept 1st, 2011 by Pear Jam books. RAPTURE is a dystopian/post-apocalyptic story about the end of the world featuring demons, angels and a half demon protagonist caught in the middle. RAPTURE was shortlisted for the Sir Julius Vogel award for best Youth novel.

On a personal note, he is married to Rose, has a son (Jack) and two border terriers, Whiskey and Raffles. He loves fishing, reading, football (soccer) and single malt Whiskeys.