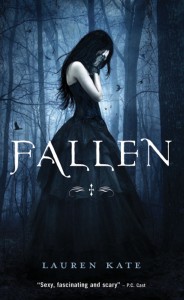 More often than not I am drawn into a book by its cover. Yes, I know this is a horrible habit…with the whole “Don’t judge a book by it’s cover” mantra people have been spouting for years, but lets be honest, it’s bound to happen. (Which…by the way… is why I think publishers have been paying very close attention to the “1st Impression” readers are presented with on the shelf.) Sometimes this theory works for me, and sometimes it doesn’t.  I was pleased that “Fallen” was one of the “positive” outcomes.

Luce is a troubled girl, everything around her is either confusing or overwhelming, which is why she is psychiatricy sentenced to the “Sword and Cross” reform school. (Think lock-down for teenage deviants complete with lots of cameras and an overwhelming amount of stale gray paint.) After being thrust into the “not so loving” hands of her new keepers she finds a few new friends;  1 quirky girl with a rebellious streak, and 1 recently orphaned kleptomaniac with keys to the entire building.

After day one, which includes a horrifying meatloaf in hair cafeteria scene, she finds herself drawn to the mysterious Daniel who looks familiar but she can’t figure out why, but while Daniel is busy flipping her off and making if very clear he’s not interested in her psycho stalker ways, Cam is waiting in the wings…the nice guy, the guy who sneaks her vegetarian approved food and plans weirdly romantic picnics in the cemetery.

Are these cryptic guys really what they seem? One seems so good, while the other seems so evil…

Just when Luce thinks she has things figured out she realizes she is completely wrong…and the chase starts.

There are girls with annoying southern accents,  a creepy serpent necklace, a UFC worthy fight in the rain, an avenging angel statue that loses her head, a girl that sees and feels ghost, an epic fire scene, and the sweetest/saddest beach scene I’ve read in a while.

“Lauren Kate’s” writing is perfectly executed, maximizing those lovely angst moments, and keeping us guessing until the end.  The plot jumps a couple of times, but nothing that is too distracting, and the ending?…well, that did nothing but make me angry. (Only because the next book in the series in not scheduled to be released until Sept. 2010.)

I genuinely enjoyed this book, and not because I am obsessed with the paranormal, more because it had an original plot and was a fantastic start to the series.

Happy reading my fellow Inmates and remember: Don’t question the weird girl with the pocket knife…if she says cut her hair, just cut it.