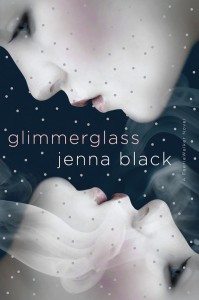 After reading roughly 1 million paranormal novels ( ha ), it tends to be a tad bit difficult to impress me. After about 50 all of the plot lines start to resemble each other and even the characters start to take on the same traits, so imagine my surprise when I finally found the time to read “Glimmerglass” and jumped into a entirely new and original world.

Dana has 1 major problem… her mother is a raging alcoholic, but when Dana decides she’s had enough of her 1 problem and hops a plane to her “faerie” father’s house in Avalon, her 1 problem starts to seem minuscule compared to the 10 she just walked into. Avalon is on the brink of political chaos, and unbeknownst to Dana, she is the missing link for anyone wanting to claim the ultimate power. Being juggled from hideyhole to hideyhole isn’t exactly what Dana had planned, and neither is being kidnapped…twice, so she makes another plan to bolt, it’s just to bad that someone was waiting in the corner for her. Will Dana ever know who to trust? Will she ever have free will again? And more importantly is Keane really the ultimate bad boy or is it actually Ethan?

Jenna Black took a classic mom vs. dad story and smacked it with the Faerie stick. She was able to create a plot line that was not only original but kept you guessing. Each and every twist brought a contradicting side to a previously established point, and the inability to figure out who is actually being honest, and who has ulterior motives makes this read a compelling one. Each character is detailed but equally mysterious, and even though a “hero” is established you can see glimmers of a triangle in the future.

I was honestly disappointed when the story ended, and even found myself thinking about if for about an hour after I flipped the cover closed on my Kindle. Now, I don’t know about you, but to me that screams success.

There were evil Aunts, tunnel monsters, a mocha slinging contest, moats, Faerie Knights, a dad that may or may not be in jail, and a very cute boy who just happens to be a fantastic liar.

If you like mythical lands, intense chase scenes and a fun read… here is a winner.

Happy reading my fellow Faeriewalkers and remember: if someone says “Hey follow me into this really dark dungeonesque type room” chances are they don’t want to play dress up.