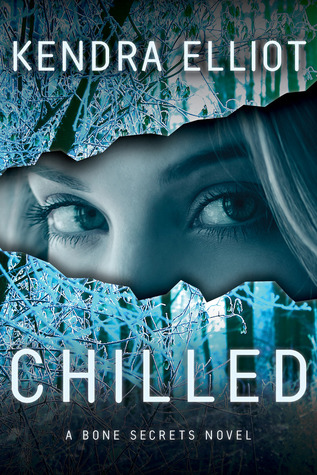 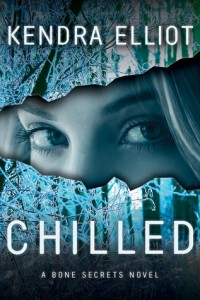 I have this dream roughly once a month where I open my eyes to find myself standing at the very top of Mount Kanchenjunga. It is absolutely breathtaking. Blue skies, flourishing brush, the intoxicating smell of lavender. It’s all bullshit of course. Lavender is a dry soil plant, the higher in altitude the lower the vegetation level and well…the average temperature at Kanchenjunga’s peak is a breezy -20 degrees. (Which completely defaces the whole “I’m wearing cargo shorts and a tank top” aspect of my dream.) But inaccurate dreamstates aside I love this dream.

Because I am a total badass.

Oversized blood thirty badgers and an incredibly high risk of injury rate aside…I made it to the top. I made nature my bitch. I am woman hear me roar!

So when I turned to page one of Kendra Elliot’s second “Bones Secrets Novel” “Chilled” and realized the entire plot was centered around a mountain climbing manhunt I got a little giddy. Screw you reoccurring dream! I have a book to replace you.

“As a forensic nurse on a search and rescue team, Brynn Nealey braves a dangerous blizzard to find the survivors of a plane crash in the Cascade Mountains. Joining her is Alex Kinton, a former US marshal with self-destructive tendencies. Alex lies his way onto Brynn’s team to find the man who killed his brother—and then administer his own brand of vigilante justice. But once the team members reach the plane’s wreckage, they discover everyone aboard has perished…except for the man Alex is hunting. Alex will do whatever it takes to track his target through the vast, snowy wilderness.

As the temperatures drop, however, so do Alex’s defenses. His contact with the sharp, kindhearted Brynn makes his lust for vengeance difficult to reconcile with his growing feelings for a woman who risks her life to help others. What will happen to Alex’s savage instincts when he finally has the opportunity to confront his brother’s killer?”

Well, first things first (since you are bound to ask) no, I didn’t like “Chilled” as much as I liked “Hidden.” (Which for the record I still recommend you read.) It’s not that the book was bad.  It wasn’t. I read it in one sitting just like I did it’s predecessor. (Not a bad sign.) I just didn’t like the characters as much.

I know what you’re thinking….” How can you not like the characters as much? It’s a series novel!”

This is the part where I tell you are right AND wrong.

“Chilled” is in fact the second in a series. But (in what I’m going to call a random stroke of literary genius) the novels are completly unrelated.  Want to read “Chilled” but haven’t read “Hidden?” No problem. These are stand alone stories that are linked by one common thread: mystery. Capeesh? Awesome.

So, back to the characters. I really liked Brynn (she woman, doctor, human shield extraordinaire.)  I really liked Alex (raging egomaniac, pill popper with a mysterious past.)  I’ll even go so far as to say I really liked the killer in this novel (killer…do I really need to elaborate on that?)  What I didn’t like (or at the very least wasn’t convinced of) was their connection. (Brynn and Alex that is. The killer I got right away. Crazy bastard.)

Elliot is an extremely talented author.  Especially when it comes to characterization.  So when 50% of the way in I found myself caring more for one of the stories sub-players (Ryan) than the leads (that were very obviously supposed to end up together despite the fact that they knew next to nothing about the other) I was slightly concerned. (Ok, that’s a lie… I was VERY concerned.)

Maybe it was the intense plot that screwed with my ability to connect.  Maybe I was so caught up in the details of “who” (and that’s a big fat freaking WHO by the way) the people were that I gave very little attention to their reactions. Maybe I should stop reading books at 3 in the morning.  Whatever the case may be I wanted, no NEEDED more, and I just didn’t get it.

So why DID I stay up until 3am reading “Chilled” if it wasn’t firing on all cylinders? Hello!!!! Mountain, blizzards, avalanches and a not 1 but 2 people who are a little off their rocker. That’s why.

The plot was not the problem.  The situations, and the unbelievable descriptive passages were spot on.  That alone was enough to keep me sucked in, regardless if I wasn’t exactly an eager beaver (oy, I should probably choose another word for that) when it came to the inevitable “sexy time” moments at the end of the book.

So what is my verdict overall?

It’s good. (And by “good” I mean…my standards are almost unattainably high, you’ll enjoy this book if you like authors like Tami Hoag or JD Robb. Do with that what you will.)

Happy Reading my fellow Kindle-ites and remember: News anchors are the root of all evil. Ok, maybe not…but Katie Couric scares the piss out of me.