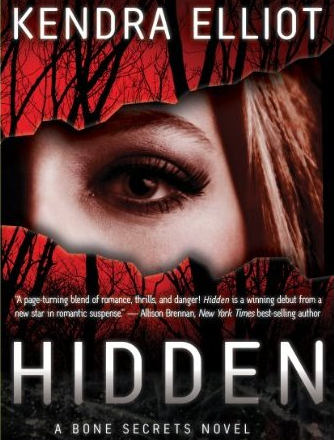 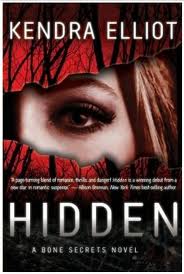 As a stay at home mother of two I often feel my life is on a loop, much like the conveyor belts you see in grocery stores.  Constantly moving but never actually going anywhere.  Because of this I crave action.  I want to move, feel the wind blowing through my hair as I speed down the highway top down, bugs in my teeth.  I yearn for danger, intrigue, a spark…of anything, just to break up the monotony that has sadly become my everyday existence. (Wow, that sounded melodramatic.) Of course these are just thoughts. Ones that if I’m honest with myself would detest on spec. Bugs in my teeth? What the hell. Danger? Keep it. I hate police stations and those two words (danger + police) are pretty much synonymous. Intrigue? Ok…that one I can handle.  Open a book and viola! As a matter of fact, I can accomplish all of these with just a few quiet moments and a vivid imagination.  You know what else helps?  Fantastic psychological thrillers like Kendra Elliot’s debut “Hidden.”

Now a forensic odontologist examining teeth and bones for the state Medical Examiner, Lacey is devastated when she arrives at a crime scene and identifies the skeletal remains as her college friend’s.

The remains are discovered on the land of ex-cop Jack Harper. Sparks fly between him and Lacey, even as they realize that the prosecution’s witnesses from a decade ago are now being murdered one by one. All the evidence points to the Co-ed Slayer as the culprit—only, he’s long since dead. So who’s the new killer? And is Lacey next in line to die?”

A fellow book blogger had a poll on their website the other day that asked the question:

“What is the most important aspect of a book?”

Well, I’m incredibly difficult and refused to give just one answer, but later (when I retrieved my head from my ass) I got it.

And this one answer alone could never be more true than in reference to a thriller.

What does this have to do with “Hidden?” Well, antsy pants, let me tell you.

Psychological thrillers are generally written from several different perspectives.  The victim. Check.  The police. Check. Check. And the Killer. Duh. But the way they are described or their “habits” (for a lack of a better word) is usually established by another character.

The victim is constructed by the love interest.

“In his arms all he’d noticed was her incredibly small size and her scent. She’d smelled like cinnamon, or vanilla, or something from a bakery.  Totally out of place in the death tent.”

The cop by the victim.

“She barely glanced at the second man.  He was a beefy Lakefield cop with an uncomfortable tightness around his mouth, his brown gaze darting to each corner of the tent.”

And while this is partially true when it comes to “Hidden” (I didn’t look those quotes up for the heck of it.) The most fascinating element to Elliot’s characters is that she allowed the killer to paint his own picture.

“When the high school shootings suddenly cropped up around the country, he’d been glued to the TV.  He’d understood those kids. He’d understood the anger and rage that provoked them to kill.  A sense of admiration and a touch of jealousy had stolen over him as he watched the endless news coverage.  They’d actually done it.  He’d thought, and dreamed, and wished.  But never followed through.  What a legacy those kids had left, no one could ever forget them.”

“Frank must’ve been a wimp.  He showed a dire lack of internal control. That’s what separates the men from the boys, Cal.  You’ve gotta have power over your emotions and actions.  A man can achieve whatever he wants with self-discipline.  But you’ve got to exercise it, develop it.”

Creepy and utterly engrossing right? Allowing the “evil” inside of her story to ultimately set his own stage afforded Elliot a creative freedom that was truly impressive.

That’s not to say the other elements of the story weren’t equally as compelling.  With an incredibly fast paced plot (despite its 387 pages) and a handful of “sexy time” moments which are sure to draw in a female audience, I can safely say that this is one of the best psycho/romantic thrillers I have read so far this year.  One better… I read it in one sitting.  Cover to cover I just couldn’t make myself put it down. (I NEEDED to know who the killer was!)

Happy reading my fellow Kindle-ites and remember: If you build it…they will come. (Yes, I know it has nothing to do with the book but it’s stuck in my head so deal with it!)