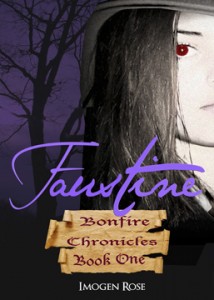 For someone that reads as much as I do, it’s nice (every once and a while) to settle in for the night with a nice familiar author; an author I KNOW can write an entertaining and captivating story; so when the opportunity presented itself to read “Faustine” the first book in the “Bonfire Chronicles” by the lovely Imogen Rose, I jumped at the chance to get my grubby little paws on it. I have never been shy with my adoration of Rose’s ability to connect with her readers through her work, so my continued appreciation for her new venture should come as no surprise.

Faustine is a demon. Well, ok, that’s not exactly accurate… Faustine is a half human/half demon hybrid princess who is about to be thrust into a very sticky situation. With her father’s sudden disappearance, Faustine, (though only 15,) finds herself with a very large pair of shoes to fill, and by large I mean people-are-being-slaughtered-and-it’s-her-duty-to-stop-it large. But finding a paranormal serial killer isn’t as easy as calling the cops. With (not only) her emotions, but her new advisors pulling her in 100 different directions Faustine finds herself on the brink of disaster. Can she find the killer before they harm anyone else? Who can she REALLY trust to keep her secrets, and at the end of the day will Faustine be able to keep it together or crumbled under the pressure of a whole culture of anxiety riddled paranormals?

There were (of course) a few things that annoyed me throughout this book, but first let me focus on the positive. #1. This book was REALLY good. I love paranormal adventures and “Faustine” had it all; action, intrigue, even a successful amount of angst shoved in for good measure. One better… Rose chose to expand her readers experience by leaving doors open. While most paranormal novels focus on 1 or 2 specific types of “creatures/humans” Rose opted for equal opportunity play time. There were demons, witches, warlocks, wanderers, vampires… blah ditty blah, chances are, if you’ve ever heard about them, they were in this book. And yes, yes.. I know what you are thinking, “Wouldn’t that make the book a little crowded?” Surprisingly…no! Rose’s plot was practically flawless, leaving no room for her characters to bump into each other or fight for control “inside” the development of the book.

Now, the bad. I know Imogen on a personal level, so for me… overlooking some of her idiosyncrasies aren’t an issue, however, for those of you that aren’t fluent in “Im Speak” you might find yourself rolling your eyes at her name dropping tendencies. For example: ” My feet were starting to ache in the five-inch Louboutins.” To me this says “Im found a new pair shoes she’s crazy about” to your everyday reader this sounds like blatant product placement. The other (very minor) issue I had was Rose’s lack of confidence in her readers ability to note sarcasm. On more than one occasion the word “not” was thrown at the end of a sentence to emphasis the previous statements ridiculousness, and on more than one occasion this was completely unnecessary. Thankfully, neither of these issues are deal breakers when it comes to the overall success of the novel, let’s just call them “nuggets of annoyingness.”

So, what did I think overall? Well.. duh, fantastic concept, fantastically executed, and a promising start to a new series.

Happy Reading my fellow Kindle-ites and remember: if you are 159 years old and plan on seducing someone, get a pedicure!