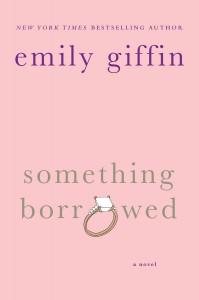 Several of you know by now that I have a very unhealthy hatred of Kate Hudson, which… under any normal circumstance would have zero to do with a book review;  however, a month ago I saw a preview for a film called “Something Borrowed” and guess who was in it.  That’s right… the ever so Yoko-esq Ms. Hudson.  I have to admit, despite an urge to chunk a brick at the TV, the movie looked wildly entertaining, so I did a little digging. Come to find out “Something Borrowed” was based on a book (obviously of the same name) by Emily Giffin. Within minutes I purchased the book. NOT because of my OCD need to read the book before the movie (which I’m sure is what you first thought) but because it was VERY clear that Darcy (the character Hudson was playing) was going to get completely, and totally SCREWED! Yes yes… I know what you are thinking, “That is a completely ridiculous reason to purchase a book” and yes, you are probably right, but luckily for me… the book itself turned out pretty decent, despite my intention to care about nothing other than Darcy’s “misfortunes.”

Rachel is used to following the rules, she is also used to getting stepped on, not literally of course, but with a best-friend like Darcy the thought of physical pain verses emotional pain is (at times) much more appealing. See… Darcy is one of those girls that is NEVER wrong.  Does her ass look fat in those jeans? Yes, probably.. but there is no way in hell you would ever tell her that, because the ramifications of truth heavily outweigh the guilt of lying. To Rachel, keeping Darcy happy is a way of life, but where does that leave her? Well, at the moment it is on the bottom floor of a department store playing “Happy Maid of Honor” to a woman who is (in a few short months) going to marrying the man she loves. To make matters worse, Rachel is finally starting to see Darcy for the woman she REALLY is, and THAT means getting a hall pass to go for what she has always wanted. Dex.

There are a few things to consider before purchasing this book. While yes, I found it to be a delightful little read, some of you may find the plot offensive. This, in the simplest of terms, is a novel about cheating.  If you are a person who has deep rooted issues with this (aka those of you who have been cheated on) this is probably a book you should take a pass on. For everyone else (well.. women, cause I honestly don’t know many men that would enjoy this book) if you can find it inside yourself to suspend your morality for 352 pages you’ll notice the elements of a classic love story. In short… put your big girl panties on if you want to read this book.

Now, all of that said, let’s focus on the elements.  The plot, though a tad slow in places, was streamlined and well executed. The characters were easily relatable, and the emotion written into each felt real, instead of detached and forced which, can sometimes be a problem in books written to be both serious AND kitschy. Other than the occasional (what seemed like) encouragement to disregard common civility I found no major flaws in the book. In fact, for chick lit (which I rarely read) it was pretty damn good.

One thought on “Wait…You Weren’t Drunk?”