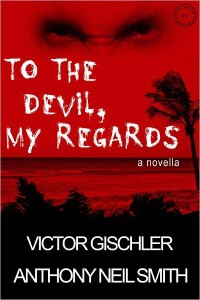 I’ve always been a fan of fast pace movies;  “Crank” “Smoking Aces” hell, even “Sin City.”  The non-stop action is like a gut check of adrenaline and no matter how hard I try I just can’t pull myself away.  The same quality of action, however, is difficult to find in a book.  The action is usually sidelined by descriptives or there is (almost always) another plot point that needs to be discussed; (which results in the reader being drug away (kicking and screaming) to another place.) The longer the book, the less “hyperactive,” it is… it’s almost inevitable, so when I realized “To The Devil, My Regards” was a novella (prose narrative longer than a short story but shorter than a novel) I got a little giddy. Here was a prime opportunity for an author (or authors as is the case with this read) to take a solid idea, slam it into 4th gear and NEVER let up.

Z.Z. DelPresto is having a bad day, not just any bad day, an extraordinarily bad day. His girlfriend is dead, some freak with a nose ring is following him, and he just found out one of his clients is a total crack pot. But just when he thought things couldn’t get much worse they did. He’s just been framed for murder. Relying on his (somewhat unorthodox) PI skills to clear his name; DelPresto sets out on (what could be considered) not only his most important case ever, but possibly his last.

Are you a fan of action? Do you like a little mystery with your morning tea… maybe a truck load of sarcasm is your style. If that’s the case look no further you have found your next read.

Despite it’s lack of character development (who is this whack job, where did he come from, and why the hell is he in jail so much?) Gischler and Smith’s little venture into “morality and the 10 quickest ways to lose it” felt surprisingly complete, and for that reason alone I commend them, (It couldn’t have been easy to write an  ADD/ADHD riddled investigative novella.) The fact that it was successful and wildly entertaining was only icing on the cake.

My only complaint… the cover art. While it’s by no means the worst I have seen, it is slightly misleading, and that fact alone could be costing them genre readers.

Happy Reading my fellow Kindle-ites and remember: if some random man jumps on your boat insisting that he’s DEA, YOU insist on seeing some credentials.

One thought on “When Bad Days Get Worse”