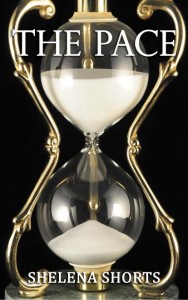 What would you do if you found your true love? Cling to him/her with all of your might? Run away scared? What if after weeks of pure bliss with this new love you found out that everything he’s told you is a lie… or is it?

I found this book out of pure happenstance.  I wanted a change of pace so I did what most mentally unstable people would do and I “Googled” “Books…change of pace” and viola’ guess what popped up… a book called “The Pace.” Now…I wasn’t expecting Google to quite so specific (or smart-ass) with my request, but since I technically asked for it, I thought it was only right to give this particular book my undivided attention.

Sophie was stuck in a rut, after moving to many times to count and being the “new girl” more times than she would like, her mother finally gave in and let her join Online High School. While this particular option would have most 18 year old girls cringing from lack of girlfriend/boyfriend interaction, Sophie was in heaven.  This is of course until her mother, who worked at the Berkley campus, decided her daughter spent way to much time in her room.  Hoping to do nothing more than to pacify her mother and keep her easy life of “school in pajamas”  in tackt she agreed to weekly lunches on campus, what she didn’t agree to however was running her Jeep into a particularly hot guys car.  After several awkward meetings and a declarations on both sides Wes and Sophie decide to date, but after an impromptu interrogation with her mom, Sophie starts to suspect that things are exactly what they seem.  In a quest to seek the truth Sophie finds more than she can handle…is Wes who he really says he is? Was she wrong to jump so quickly? And what is it about 1916 that has everybody such a flutter?

“Shorts” writing was actually a tad bit baffling.  The first half of the book was almost unbearably choppy and progressed at an uncanny pace (0-60 in 3 chapters), but once I hit the 50% mark it all sorta took an abrupt halt and solidified into a pretty decent read.  The plot although jumpy at points what intriguing and amazingly original (which is kinda hard to find these days) and even though there were times when I was sure that I wasn’t going to like where it was going, the ending had me exactly where the author wanted me…eager to read it’s follow up.

There were dented Maseratis, loads of mysterious cash, a pissed off boyfriend with a broken hand, lots of “Say what?” moments, and an amazingly written torture scene that had me unconsciously holding my fingers.

If you are tired of reading the same thing over and over and need a change of pace like I did…jump on in, the water is fine, but if you don’t want to get wrapped up into another series (which in truth…if I had known this was a book 1, I wouldn’t have touched it) then steer clear because there is no way to recover from the ending without reading book number 2.