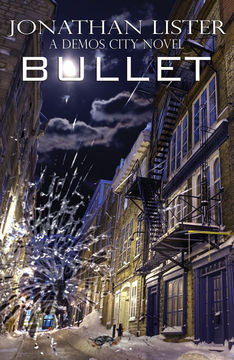 J. Taylor Publishing is giving away FIVE ARCs of Bullet

A father’s love doesn’t bend, so what happens when it breaks?

Corruption, dark truths, and a new Alpha mean Leon Gray’s days of running without a pack are over. At least, that’s what everyone but him believes.

He’d rather be helping his teenage daughter navigate the landmine life of a full werewolf, finish out his servitude as bodyguard to a former Demos City reporter and, in all honesty, not be taken advantage of by a beautiful woman who really only wants him for his body—figuratively and metaphorically.

Of course, the only way any of that might happen is if he’s dead. That’s likely given the information the reporter has unearthed and the territorial battles already underway between packs. If only Demos City’s corruption didn’t have such deep roots—older than the bones of the city or any of the werewolves who’ve decided to claim it. A city can only take so many power hungry mongrels invading it at one time, and Leon can only take so much knowing his daughter lives within its boundaries.

War has come to Demos City.

It’s up to Leon to fix … what’s most important to him.

“Watch the news lately?” Jackson Harper asks, as four of his wolves stiff-arm their way into the living room. They’re a small, but mean, group of gentlemen, equipped with the furrowed brows and cauliflower ears to prove it.

The Old Wolf’s squat frame remains on the threshold. Slicked-back white hair runs to the nape of his neck, ending at the collar of a red flannel shirt. He could be an out-of-work lumberjack, or a paper towel spokesmodel past his expiration date. Really, he’s the Alpha in Demos City, but no one calls him that, or haven’t in the last ten years, anyway.

Harper takes a deliberate, almost sluggish step into my apartment. Behind me, his pack members fan out, one moving into the hallway that leads to the bedrooms, another heading to the kitchen, and the remaining two planting themselves square to my six o’clock.

“I saw the damnedest thing on the news not too long ago,” the Alpha—oh, why not?—says. “Someone blew up half of Front Street downtown. Cops said there were at least forty-three confirmed dead. Can you believe that?”

“Know anything about it?” Harper closes the front door behind him. “Heard your name mentioned.”

“That depends,” I say, hemmed in by wolves. “Do you want to hear the lie I planned, or the one I just made up?”

Harper lets out a wheeze of a laugh, but it doesn’t change the circumstances. An Alpha doesn’t pay a social call in the middle of the night unless there’s an eviction about to come down, or a verdict from a more lethal category.

There are no means left for me to make a clean exit either. I can smell the wolves who are just outside, which means all routes are blocked.

“You know why I let you stay in my city?” Jack asks. “Your little girl,” he says, not waiting for my answer. “She was the prettiest baby, I think, I’ve ever seen.
Couldn’t just leave her out in the cold. Only a heartless prick could look a toddler in the face and turn her away.”

“And we’re both grateful.” Luckily, Shauna’s not here, and I’m not sure she’d think the same right now anyway.

“Is that so?” Harper moves a pace closer to me. He takes a breath that seems like it should make his ribs creak from the expansion. Nostrils flare as he lets it out in a single, audible blast. “You want to tell me why a man who swore he was going to keep a low profile in this city would even think about getting involved in a pissing contest with the Widow’s Hand?”

Rook’s blood in my mouth, the butter soft separation of skin beneath fangs, is an easy memory to find. The beast tends to those moments, pruning them in its macabre psyche to keep them crisp and vivid in their recollection. A shame I didn’t get to see him expire, to watch the murderous candle go out for good. “I took a job,” I finally say. “I was on the clock when the Widow’s Hand got in the way. Couldn’t let them just kill my boss. A guy could get a reputation if he starts letting racist prison gangs walk all over him.”

Ready to see what trouble Leon Gray’s getting into next? If you love werewolf goodness at its urban fantasy finest, then you are going to love this next addition to the Demos City Novels.

And J. Taylor Publishing is giving away FIVE ARC copies.

You don’t even have to be a book blogger!

Nope, so long as you are willing to leave an honest review* by June 16th 2014, you are eligible to enter.

Then just fill out the form and keep your fingers crossed.

*A review should consist of your honest thoughts regarding a book, usually a few paragraphs long and around 150 – 500 (or more, if desired) words in length.

Jonathan Lister is a full-time writer with work appearing in outlets of USA Today, The Houston Chronicle and many others. A graduate of the Jack Kerouac School of Disembodied Poetics at Naropa University, he’s waited an unspeakable amount of tables en route to having the career he wants, and the ability to the tell stories he loves. Crossroads is Jonathan’s first book-length work of fiction. He currently lives in the Philadelphia area and continues to drink too much coffee.