Today’s guest post comes from a very talented Chicago resident (and friend of mine) Janelle Jensen.  Not only does she write with the best of them (check out her work at www.janellerjensen.wordpress.com) but she takes wildlife photos that will knock your socks off! If you would like to get to know her better be sure to stop by her site or follower her on twitter at @Janelle_Jensen

The Kensei – A Guest Review 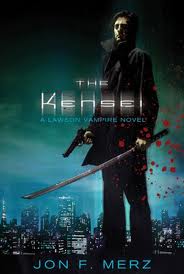 From the moment I saw “The Kensei,” by Jon F. Merz, on Misty’s list for guest reviewers, I leapt at the chance to read this book, hoping it would not let me down.  I have been fascinated by the Japanese fighting culture from a young age and in fact own several katanas, the slender, curved swords commonly referred to as “samurai swords.” This novel did not let me down!

Merz’s story draws you in from the very beginning, beginning with an action-packed fight to the death, resulting in the demise of a Yakuza, one of the famed Japanese mob. Lawson’s vacation was only beginning, and it was already not off to a good start.  It didn’t help that being born into a vampire race tended to complicate things.  He is a Fixer, sworn to protect the fine balance between vampires and humans, and he’s going to need all the help he can get.  He finds it in his sensuous, passionate lover, Talya, but she’s brought problems of her own. An ex-KGB operative, working on her own, her mission involves the required assistance of Lawson to bring down a criminal ring involved in organ trafficking.  And now, because he interrupted an assassination attempt, he has become the target of a master swordsman, known only as Kensei, “sword saint.”

Truly talented writing drew me in.  Not only are the fight scenes well played, but the imagery puts you right there on the sidelines.  Jon F. Merz is a fantastic writer, and his witty and sometimes humorous wordplay will keep you nose-deep in this book until the very end.

This is not Lawson’s first appearance in Merz’s novels.  However, don’t let that make you think that you have to go back to the beginning to understand the history of the character.  “The Kensei” is an excellent stand-alone piece of writing.  Unfortunately for me, I have to go back and read the rest of the series, because I am now hooked.  Warning, reading this book will lead you to more spontaneous reading that will spiral out of control!

3 thoughts on “Guest Review – The Kensei”