As promised welcome to “It’s A Tween Thing ” Thursday’s.  After almost a year of ignoring the impressionable minds of pre-teens I realized I was doing them a horrible disservice. So here it is.. The 1st in a long line of fantastic books penned to fuel the imaginations of America’s future.  Happy reading and remember: when this worlds got you down…pick up a new one! 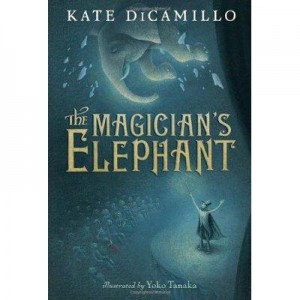 Amazon Best of the Month, September 2009: Newbery Medalist Kate DiCamillo–author of The Tale of Despereaux and The Miraculous Journey of Edward Tulane– has crafted another exquisite novel for young readers. The Magician’s Elephant tells the tale of Peter Augustus Duchene, a ten-year-old orphan who receives an unbelievable piece of information from the local fortuneteller. Peter learns that his fate is tied to an elephant that has inexplicably fallen from the sky when a magician’s trick goes terribly wrong. Why did it happen? And, how can an elephant possibly change the course of Peter’s life? This darkly atmospheric, yet hopeful tale, demonstrates that when the answers to life’s big questions are opaque or unforthcoming, all is not lost. DiCamillo’s rhythmic writing, combined with Yoko Tanaka’s mysterious black-and-white illustrations, enchants and calls out to our sincerest wishes and dreams (recommended for readers ages 8-13). –Lauren Nemroff

Starred Review. Grade 4–6—On a perfectly ordinary day, Peter Augustus Duchene goes to the market square of the city of Baltese. Instead of buying the fish and bread that his guardian, Vilna Lutz, has asked him to procure, he uses the coin to pay a fortune-teller to get information about his sister, whom he believes to be dead. He is told that she is alive, and that an elephant will lead him to her. That very night at a performance in the town’s opera house, a magician conjures up an elephant (by mistake) that crashes through the roof and cripples the society dame she happens to land on. The lives of the boy, his guardian, and the local policeman, along with the magician and his unfortunate victim, as well as a beggar, his dog, a sculptor, and a nun all intertwine in a series of events triggered by the appearance of the elephant. Miraculous events resolve not only the mystery of the whereabouts of Peter’s sister, but also the deeper needs of all of the individuals involved. DiCamillo’s carefully crafted prose creates an evocative aura of timelessness for a story that is, in fact, timeless. Tanaka’s acrylic artwork is meticulous in detail and aptly matches the tone of the narrative. This is a book that demands to be read aloud.—Tim Wadham, St. Louis County Library, MO
Copyright © Reed Business Information, a division of Reed Elsevier Inc. All rights reserved.
See all Editorial Reviews