Hello my fellow Kindle-ites! Hope everyone is having a fantastic week.  Tomorrow I will post the review for “The Lovely Bones” but to quench your literary appetites until then… here is this weeks addition to “It’s A Tween Thing.”  Happy reading and remember: When THIS worlds got you down…pick up a new one! 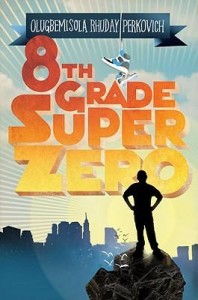 Amazon Best Books of the Month, January 2010 They don’t call it middle school for nothing. Reggie McKnight (aka “Pukey”) is trying hard to stay under the radar after a really embarrassing start to the school year. But, he’s somehow been drawn into the middle of a big school election, a volunteer project at the local homeless shelter, and the role of “Big Buddy” for a kid in the neighborhood. How will he ever find time to finish his comic book, Night Man? Reggie might see himself as a wimpy kid, but he’s anything but as steps up to new challenges and confronts big questions about doing the right thing in a tough world. Olugbemisola Rhuday-Perkovich’s debut novel is a smart and satisfying read for teens and ‘tweens. –Lauren Nemroff

Ever since a deeply unfortunate incident earlier this year, Reggie’s been known as “Pukey” McKnight at his high-intensity Brooklyn middle school. He wants to turn his image around, but he has other things on his mind as well: his father, who’s out of a job; his best friends, Ruthie and Joe C.; his former best friend Donovan, who’s now become a jerk; and of course, the beautiful Mialonie. The elections for school president are coming up, but with his notorious nickname and “nothing” social status, Reggie wouldn’t stand a chance, if he even had the courage to run.

Then Reggie gets involved with a local homeless shelter, the Olive Branch. Haunted by two of the clients there–George, a once-proud man now living on the streets, and Charlie, a six-year-old kid who becomes his official “Little Buddy”–he begins to think about making a difference, both in the world and at school. Pukey for President? It can happen . . . if he starts believing.