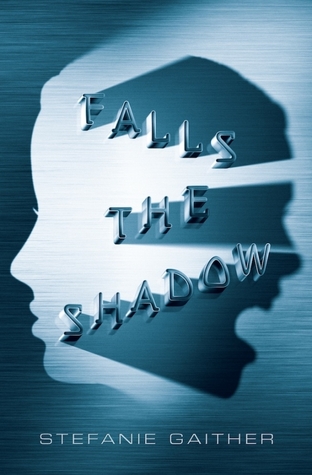 Falls The Shadow by Stefanie Gaither

When Cate Benson was twelve, her sister died.

Two hours after the funeral, they picked up Violet’s replacement, and it was like nothing had ever happened. Because Cate’s parents are among those who decided to grant their children a sort of immortality—by cloning them at birth. So this new Violet has the same smile. The same laugh. That same perfect face. Thanks to advancements in mind-uploading technology, she even has all the same memories as the girl she replaced.

She also might have murdered the most popular girl in school.

Or at least, that’s what the paparazzi and crazy anti-cloning protesters want everyone to think: that clones are violent, unpredictable monsters. Cate is used to hearing all that, though. She’s used to standing up for her sister too, and she’s determined to prove her innocence now—at whatever the cost. But the deeper she digs for the truth, the further Cate’s carefully-constructed life begins to unravel, unveiling a world filled with copies and lies, where nothing and no one—not even her sister— is completely what they seem.

In a pulse pounding debut, Stefanie Gaither takes readers on a nail-biting ride through a future that looks frighteningly similar to our own time and asks: how far are you willing to go to keep your family together?

Ok…let’s look at just 1 sentence in this synopsis:

I don’t know about you but I’m fairly certain NOTHING creeps me out more than the thought of clones walking around with the memories of dead people. Add the possible serial killer kick to that, and I’m completely freaked out. Which is obviously why I’m going to snatch this book up the second its available.

The world is filled with copies!!

They are considered unpredictable monsters!

THERE IS PAPARAZZI!!! (<— the scariest of all components.)

If those things alone don’t spark you interest…YOU HAVE NO SOUL!! (Just kidding…maybe.) Regardless, this book sounds too messed up not to be fantastic. Let’s hope I’m right cause THIS is what I am waiting for.