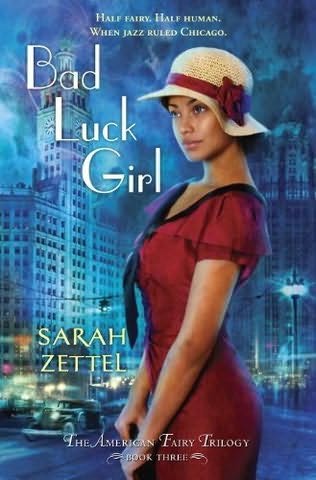 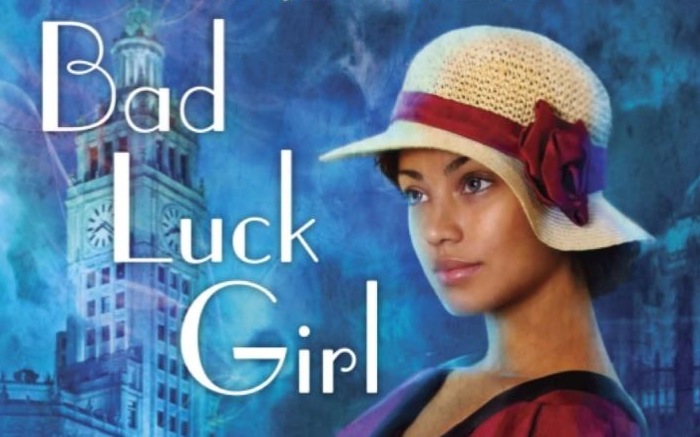 Until a few days ago my five year old daughter was fearless. She stood up to bullies, caught bugs for fun, and rode her bike as fast as she could with complete and utter abandon. Today…my daughter was replaced by a girl I did not recognize. One that sat trapped in her room, yelling from the other side of a closed door for help. Knowing my daughter’s disposition and ability to battle her own demons, I was instantly transformed into Mama Bear and rushed to her room, heart in my throat, to investigate. What I found was a terrified little girl, perched on the edge of her pink bed, muttering about monsters. When I asked her about it she replied:

“Mommy, I think there might be monsters on the other side of my door.”

Admittedly, I was a tad stumped.

“Monsters?” I asked. She shook her head, agreeing.

Being in unfamiliar territory I had to think fast. Luckily I happened to be holding a copy of Sarah Zettel’s “Bad Luck Girl.” Drawing inspiration from the bones of this fascinating fairy fantasy (aka the protagonist controls the gates between the human and fairy world) I began to spin a tale. A tale of a magical barrier outside of the house restricting any kind of monster from entering. The story worked, and my fearless little girl returned (praise Jesus) but then it hit me. The story I’d been ragging so hard on (for more than two weeks) had actually left a mark. Woke a little girls (and her mother’s) imagination and roused courage. This one little story, about a young fairy princess named Callie suddenly rooted itself into my reality.

After rescuing her parents from the Seelie king at Hearst Castle, Callie is caught up in the war between the fairies of the Midnight Throne and the Sunlit Kingdoms. By accident, she discovers that fairies aren’t the only magical creatures in the world. There’s also Halfers, misfits that are half fairy and half other–laced with strange magic and big-city attitude. As the war heats up, Callie’s world falls apart. And even though she’s the child of prophecy, she doubts she can save the Halfers, her people, her family, and Jack, let alone herself. The fairies all say Callie is the Bad Luck Girl, and she’s starting to believe them.

If I’m being honest, I was a little skeptical about starting “Bad Luck Girl.” I was not entirely pleased with the first novel in the series (“Dust Girl.”) And while the second novel (“Golden Girl“) was significantly better, the combination of the two didn’t bode well for my expectations. I think the word “hesitant” would best describe my frame of mind. However, “Golden Girl” had ended with one word… WAR. And how can ANYONE turn away from a word like that? So I began to read, and after 2 books and roughly 500 pages, I finally found my happy place among the American Fairies.

The thing about fairies (if you’ve never read about them) is that they are incredibly sneaky. Their allegiances are thinly formed, and their morals are most commonly absent. When you add these traits to a war that has been brewing for years the result can be wildly entertaining. Traitors are born, lies are told, people are magiked into beliefs they never had before. These qualities of deception, malevolence, and even (shockingly) compassion and love are what make up the world inside “Bad Luck Girl.” They are also what contributed to the perfect ending (though a tad rushed) and the best book in the entire series.

It’s safe to say that things are not always as they appear inside this novel, and figuring that out is half of the fun.

The other half if finally getting to see behind all of the curtains.

We are finally introduced to Jack (who has been in all 3 novels) in a very real way. We learn about what makes him tick, what holds him back, and what drives him. We learn about Callie’s Mama, her Papa. We discover where the anger fueling the Seelie King, and his evil minion (Uncle Shake) comes from. We walk beside Callie as she finally discovers who she is and why she is so important. (Despite her very bad luck.) The prophecy is explained. New fairies (or Halfers) are introduced, and on top of all that…we get to experience the splendor of the fairy world and why it’s so important for Callie not to forget where she comes from.

The ride is wild, it’s fast, and it has more heart in one chapter than the whole of the first two books. (Which says A LOT.) While I may have “started” to connect with the characters in “Golden Girl” it wasn’t until “Bad Luck Girl” that I truly felt like I knew them and had a reason to be on their side.

Yes, Zettel’s way of relaying her fantastical facts is still fast and furious. You MUST pay attention or you will find yourself completely lost. But the explanations that came along with book two help smooth the leaps and bounds in book three. They no longer seemed taxing. Just…fun.

I’ll be the first to go on record saying that this series isn’t going to be for everyone. Especially those that get bogged down by history. (There are quite a few history lessons between the three books, including segregation, prohibition, and The Great Depression…) But it’s safe to say that there WILL be a few out there that can trudge through the chaos of book one and find themselves happy with the series by book 3. (Like I myself was.) It all depends on how much you enjoy magic. Lots and lots of magic. Because “The American Fairy Trilogy” is all about how to control, use, and try not to abuse it.

Happy reading my fellow Kindle-ites and remember: Just when you think it’s over the author writes and epilogue and throws out a word like… “Until…” Dang it!