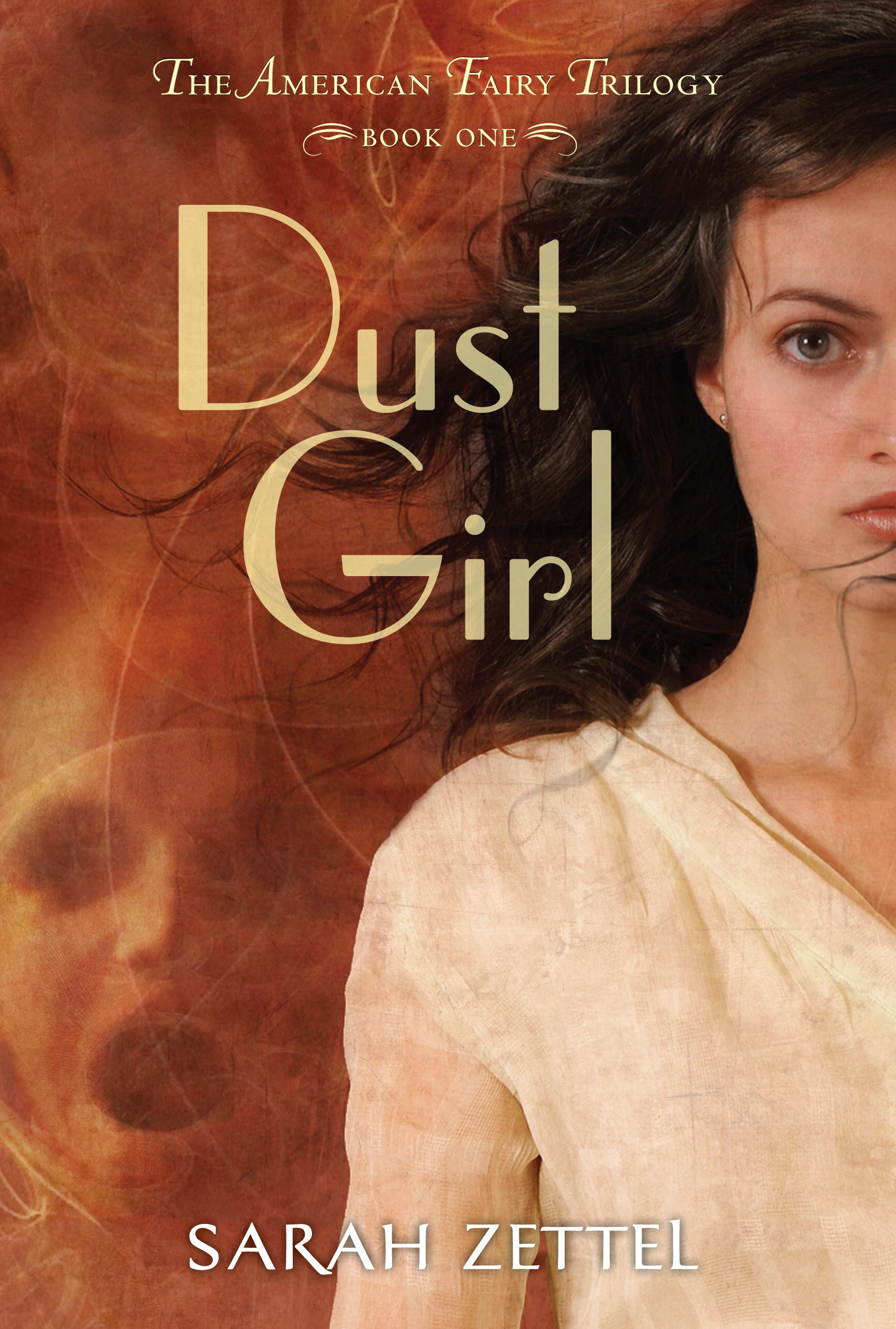 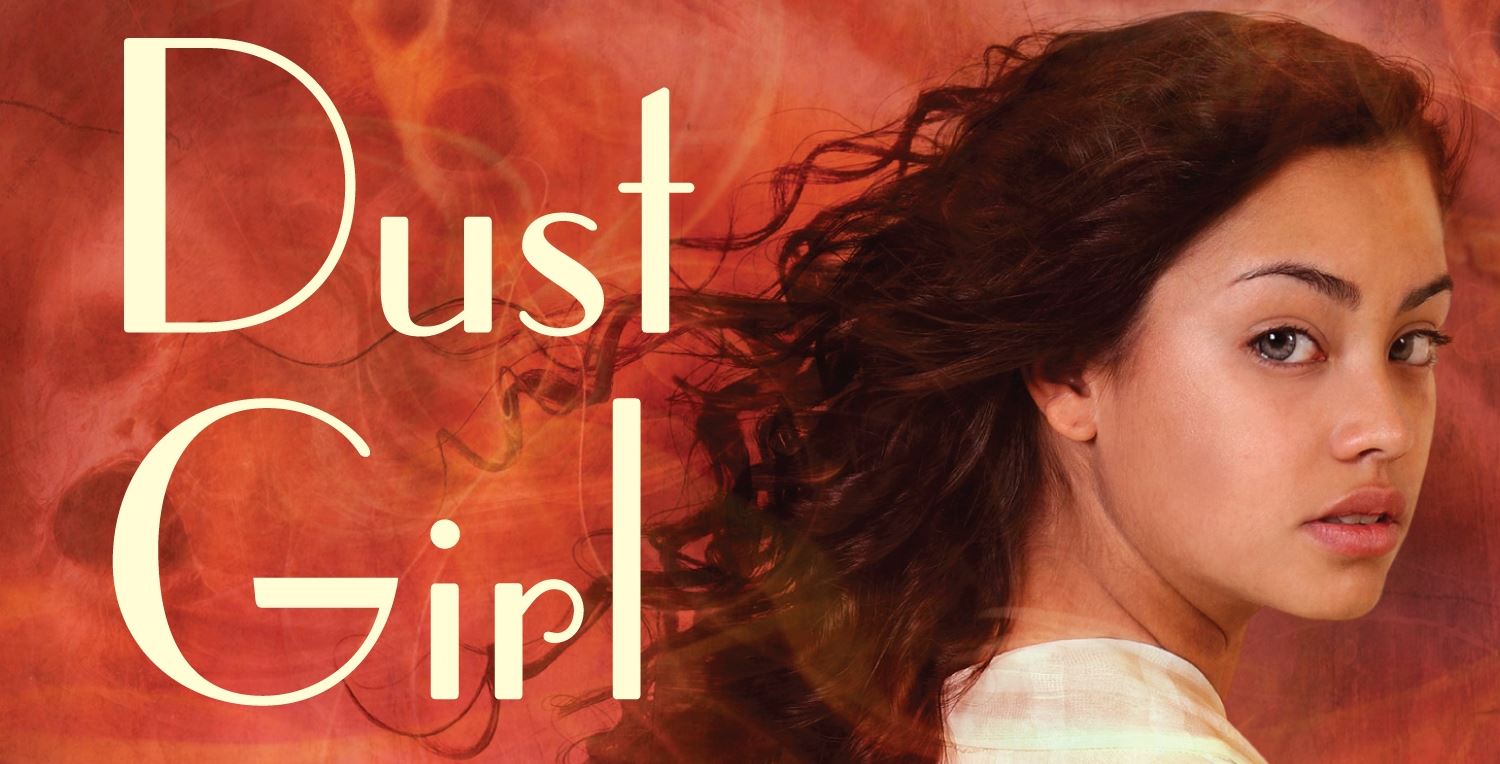 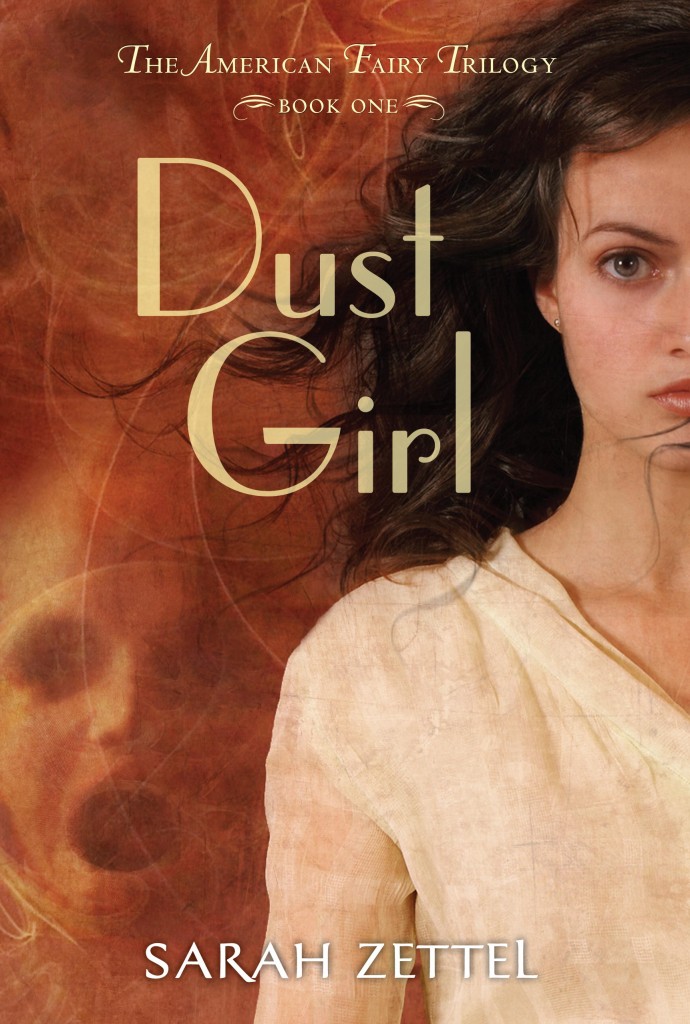 When I was a child my fascination with books was driven by the belief that ANYTHING could happen. My imagination wasn’t stunted by mature (AKA: adult) sensibilities. And because of this my mind was more open to the fantastical. I did not go into a book with the thought, “Oh, this is a fairy book, nothing in this is going to be real, but it should be fun to read” but instead jumped in with arms and mind wide open. Accepting of everything that was scrolled across the page. I wasn’t jaded by reality. I was awed by the lack of it. Being so much older now, I wish there were times I could go back to that place. I’m not implying I don’t get lost inside stories, but when I stated reading Sarah Zettel’s first book in her American Fairy Trilogy, “Dust Girl” I found I couldn’t turn my “sensible switch” off and it made a book I’m sure I would have found utterly enthralling at 12, down right cacophonous at 33.

Callie LeRoux is choking on dust. Just as the biggest dust storm in history sweeps through the Midwest, Callie discovers her mother’s long-kept secret. Callie’s not just mixed race—she’s half fairy, too. Now, Callie’s fairy kin have found where she’s been hidden, and they’re coming for her.

While dust engulfs the prairie, magic unfolds around Callie. Buildings flicker from lush to shabby, and people aren’t what they seem. The only person Callie can trust may be Jack, the charming ex-bootlegger she helped break out of jail.

From the despair of the Dust Bowl to the hot jazz of Kansas City and the dangerous beauties of the fairy realm, Sarah Zettel creates a world rooted equally in American history and in magic, where two fairy clans war over a girl marked by prophecy.

It is incredibly difficult for me to flat-out dislike a book, so let me start the review portion of this rant by saying that (despite my list of dislikes that are sure to follow) I didn’t hate this novel. Instead…I thought it was a rather catastrophic beginning to a series I rather enjoyed by the end of book 3. (Yes, I’ve read the entire series.)

Giving props where props are due, the first paragraph of “Dust Girl” was almost perfect. My interest was peaked and I felt the first tingles of an awesome story start flowing through my veins. (Which is obviously what you want to happen.)

And for a few more pages I felt the same way. Then (insert dramatic music) a dust storm arose and EVERYTHING just fell apart.

Imagine for a second (if you will) six musicians, all playing different instruments, warming up for the performance of their lives. After a few minutes their conductor steps on stage and gives the signal to play only…when they start they are all playing different songs. You can almost hear each individual tune if you focus hard enough, but it’s tiring and the collective sound is just to chaotic. This is how the entire plot of “Dust Girl” reads. There are all of these perfect little sub plots (missing parents, grasshopper people, evil train station henchmen) but the “main story” the story of Callie and the who/what/why of her existence, AND what she is ultimately fighting for (ie: to find her parents) is covered by layers upon layers of, well…dust. It makes for a difficult read. If for no other reason than the tidal wave of fantastical information. (That’s code for:  a lot to process into an image in your head.) For example:

“After that, I started seeing all kinds of things. A goblin squatted on the bell for the test-of-strength game, swatting the weight back down whenever a man hit the lever so that no one made the bell ring. The pretty lady in the bathing suit sitting on the platform above the dunk tank was a mermaid. A spott-faced cook at the lunch counter dished up steaks and fries to a pair of wolves in straw boaters and white linen suits. A couple dressed for dancing was having an argument out from of the Tilt-A-Whirl and a whole crowd of knee-high imps in ball gowns gathered around them and cheered. This was the in-between place. Fairies and humans both walked here. Except while the fairies could see the humans, the humans couldn’t see the fairies.”

There are no fewer than 8 things that need to be imagined in this 1 paragraph. If this paragraph had been on the back of a few elongated descriptions (or even some dialogue) it would have been a cinch to swallow, BUT it wasn’t. It came at 81%, behind roughly 200 pages of paragraphs exactly like it. In short, if felt rushed, as if Zettel didn’t know WHERE she wan’t to go so she went EVERYWHERE.

The biggest flaw however was not the break-neck speed, or the wealth of elements. It was the blatant lack of crucial information.

With everything going on, the twists, turns, goblins and magical wishes…HOW the fairy world “WORKED” was never even touched upon. Now, after reading the second book (and having been artfully clued in) I’m willing to bet this was intentional. (After-all, Cassie knew nothing of herself, how could she tell us?) But for arguments sake, it made almost everything else in the novel completely irrelevant. There was no WHY so it made all the HOWS confusing.

At the end of the day however, it’s my bludgeoning childhood curiosity that won out. It’s simply impossible to have passages like this one:

“What do you see?” I asked Jack. “They’re dead, Callie. That one…that one’s been shot, and that one’s got her head on her lap, like she needs a hatbox. That one’s got the scarlet fever, and that one…” He shuddered and closed his eyes. “What do you see?” “They all look fine to me. They look…they look like they’re on a train trip. Nothing special, except…” The I realized what was special, what I’d missed before. “Except black and white and brow, they’re all sitting together. Nobody’s split them up.” They I looked at them harder. “Can you see their eyes?” I asked Jack.”

and not wonder what happens next. Which (in all honesty) is why I read the second book.

So here is where I stand at the end of the day. This novel is a hot mess. It does not ask or answer any of the correct questions. What it DOES though, is set a pretty spectacular scene for its sequel “Golden Girl.” (Which in case you were curious I read in one sitting.)

The choice is yours…

B) Pass on the entire lot and call it a day.

I’m still not entirely certain which I would have picked if offered the insight before starting the journey.

Happy Reading my fellow Kindle-ites and remember: Where you come from is not as important as who you are.