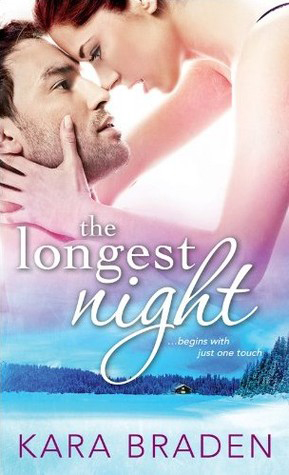 The Longest Night by Kara Braden

Years ago, former Marine Captain Cecily Knight fled her dark past and the nightmares forever haunting her nights. Alone in the remote Canadian wilderness, she survives day to day…until Ian Fairchild comes storming into her life and shatters her protective seclusion.

Aloof but intriguing, defensive but undeniable, Ian is everything Cecily shouldn’t want but can’t ignore. He watches her with shrewd blue eyes, as if determined to decipher her secrets…and for the first time in years, she finds herself coming alive beneath the hands of a man with too many scars to count.
As the hushed and harsh winter closes in around them, two lost souls find themselves on the precipice of a love that could save their lives…or destroy them forever.

Cecily shifted her weight, and Ian caught her sleeve, silently cursing the bulky jackets and gloves that separated them both. At the touch, she went still, saying, “Ian—“

“Cecily,” he interrupted quietly. He wanted to pull away her sunglasses, but he sensed that she needed that little artificial shield. If Ian pushed too hard, she would shut down completely, and he might never get another chance at her. Even this might be too much, but Ian had to try.

Lightly holding her sleeve, he raised his free hand and used his teeth to tug off the glove. Her head turned sharply to watch the path of the glove as Ian tossed it aside. Cold air bit at his fingers, but he didn’t care. He set his fingertips to her face, for an instant feeling the icy skin of her jaw before she flinched away.

“Cecily,” Ian repeated quietly, soothingly, and touched again. This time, she didn’t pull back. She parted her lips and inhaled quietly. The motion drew his gaze down, and he saw no reason at all not to chase that breath.

Tight with tension, her lips tasted of cold and snow. Subtle, burning point of contact connected them skin-to-skin—Ian’s fingertips on her face, his thumb on the thinner flesh over her cheekbone, their lips touching lightly The kiss was barely more than the air they shared for one breath, two. Her exhale shuddered against his mouth.

What People Are Saying…

“One of the best debuting romance writers in memory… Braden has a genuine gift for this genre, and readers will hope to see many more books carrying her name.” – Booklist Starred Review

“In this touching and stupendously fresh debut, Braden proves that one doesn’t have to turn an entire genre on its head to get something new and exciting. Contemporary romance fans will savor every page.” – Publishers Weekly Starred Review 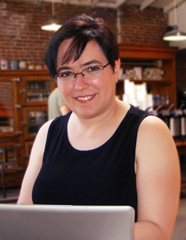 Kara Braden makes her debut in modern romance with The Longest Night, a story of love in isolation. She believes that engaging, romantic fantasy can be found everywhere in the world, even in the most unlikely places. With the support of her wonderful husband, cats, and dogs, she writes from her home office outside Phoenix, Arizona, where she spends her time hiding from the sunlight and heat.

When one of your friends is a green thumb & easily

When your largest pot is not big enough for your s

Why yes, yes I have almost hit my 5 day goal. Than

I love me some space operas! 😍 Anyone read this

Well...I didn’t die. But I could definitely tell

What happened to my baby?! 😭

Girl has officially disappeared into “organizati

Man child finally got his mop chopped. Of course w

Spotted a ramen shop & of course had to stop. See

When one makes a pit stop in Boerne, one must visi

Done. 😊 Can’t wait to hand this off on Sunday

Working on something new for one of my church sist

When your Saturday evening includes your oldest DJ

GET INTO MY BELLY! It’s been so long since I’v

7 more to add to my completed list. What about you

Haven’t been to a brick & mortar bookstore since

Kids are gone all day so David & I decided to make