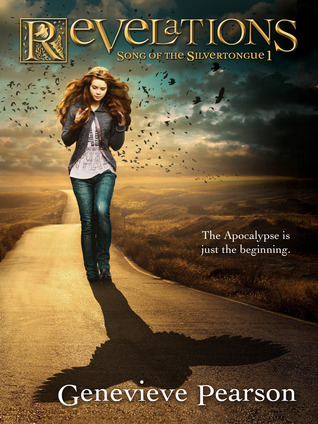 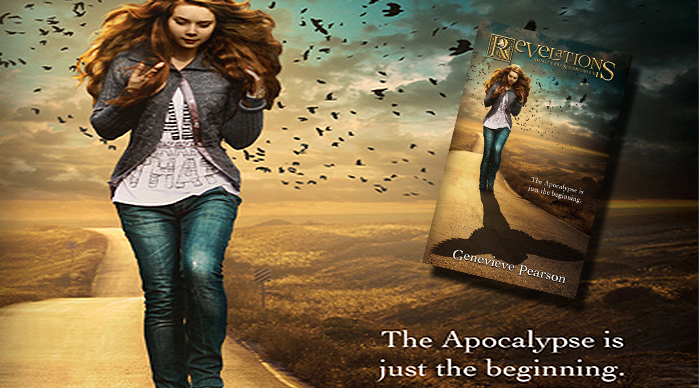 “Welcome to adulthood. It’s a bitch. But the fun part is, you can still spit in the wind.”

When I was little I spent a lot of time in church. Without fail…every Sunday you would find my lacy dressed, shiny paten leather shoe, missing panties (that’s a story for another day) tushie front and center to take in the gospel according to Mike (our minister.)

When I got older I didn’t go as much (mostly because I was afraid I’d spontaneously burst into flames the second my emo ass passed the threshold) but that didn’t mean I forgot the lessons of my youth.

I am a reader after all, and the Bible is a pretty interestingly gory life-affirming book. So when my, very slow to comprehend, mind realized “Revelations” by Genevieve Pearson was less about “a big reveal” (Hey! You have wings!) And more about “Revelations” the most graphic (according to my 8-year-old mind) book in the Bible. I KNEW I had to read it. Hello!! It’s freaking Revelations! Toads fall from the sky in Revelations! Sign me up.

“When four seemingly über-cool college kids arrive in a small West Texas town, only one girl recognizes them for who they really are—the Four Horsemen of the Apocalypse. Nineteen years old, a greeter at the local Smiley’s Supercenter, Kyrie’s been blessed with an uncommonly good intuition…and a few other abilities she’s been keeping secret.

Those abilities aren’t enough to deal with the Horsemen, though, who bring with them a magnitude of evil Kyrie’s never seen before. Adding to the complications, her best friend has gone missing and Nate, her gorgeous but chronically deceptive ex-flame, falls back into her life. That can’t be a coincidence, can it? Then there’s Aaron, the oldest child in a family considered overly-religious even by Texas standards. He seems determined to help her whether she wants it or not.

As plagues descend on the tiny town, Kyrie finds herself facing down Death, Pestilence, Famine and War in a fight for the survival of the small town she calls home. But as myth becomes reality and discoveries are made that shake her to her core, she begins to waver in her conviction of right and wrong. Temptation waits in the dark of stormy Texas nights, and if Kyrie can’t find the will to fight any longer, the end of days are only just beginning.”

At the risk of sounding like a total lunatic (though I’m pretty sure I am) I loved this book for it’s rather crafty way of combining witty internal dialogue with the oppressive inevitability of doom and gloom.

“And here I hesitated. Certainly, one might wonder at this pause. On the one hand, four instruments of pure living evil were searching the house behind us, with uncertain, but clearly malicious motives. On the other hand, it was a motorcycle. Or, as my mama called them, a Death Mobile for people who want Soup Brains.”

“A battle for the sake of humanity. Epic. Chilling. How totally un-me and un-my whole life until this point. I go to community college, for crying out loud! I work at Wal-Mart’s poor cousin of a store. I did not believe in Angels and I never could remember a point in my life when I did. Unicorns, yes, until I was seven and I sat next to a drainage pond for several hours and one never showed. Angels? Nope.”

The bones of this story are nothing short of horrific (the world is ending and there is crap anyone can do about it.) The situation that Kyrie finds herself tangled up in is appalling (the devil has a crush on her? WTH!)  But the way in which Pearson chose to relay  the “adventure” (and I say that very tongue in cheek) was freaking brilliant.

Because Kyrie is freaking funny! She is a no-nonsense girl stuck in a nonsense world and the only way she knows how to cope with it is by spewing snark. Even more entertaining…when she finally reaches her BS limit and nose-dives into reality. (This is where her characterization really shines.)

But snark can’t push a plot, so let me tell you about the rest of the book.

The Four Horsemen of the Apocalypse (also known as Death, Pestilence, Famine and War for all of you Biblically accurate people) are probably the most interesting way I’ve ever been introduced to “mayhem” (violent or damaging disorder; chaos.) It’s clear from the second they appear that something is not quite right (aka…the sight of them makes her puke. Literally.) But it’s the way they stalk around her that drives the plot. What is it about her that they find so dang interesting? Why does War keep issuing the mother of all stare-downs? Why does Death smell like rotten eggs (oh, wait…he’s death. Nevermind.) The point is…these four characters acted as catalyst to an already intriguing plot. They are the “villains” that triggered Revelations infamous plagues (*cue The Weather Girls* It’s Raining Frogs…Hallelujah, it’s raining frogs..) Without them it would have been just another “The devil wants your body” book, and Lord know we have enough of those lying around.

My final thoughts (because I’m sure you are tired of my rambling by now) this was an action packed, fast-paced, look at the end of the world. There was just enough romance to keep paranormal lovers happy, while those of us that enjoy a little gore with our apocalypse could cuddle up with a few rabid crows and a swarm of hungry cicadas.

The characters were great. The story had just enough twist to make your mouth fall open. And…it was entertaining. Who could ask for more than that?