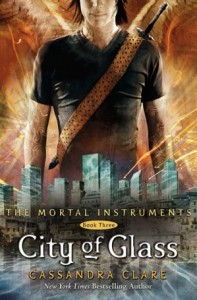 And so the story ends with  "City of Glass"

Clare did not disappoint with her final installment of "The Mortal Instruments" books.  I thought…for about 5 chapters…that I was going to hate it. That I was going to finish this series being pissy and agitated and would have to make up my own ending just to satisfy my overactive head,  but FINALLY it turned around.

The book was epic, in that 20 chapters of unadulterated fighting sorta way. I was introduced to even more demons, (One which had a weird resemblance to an old boss of mine.) I learned how to relieve people of those  pesky little problems called hands (with nothing but a whip), and the long awaited prodigal mother returned…only to get an ass chewing from her 16 year old daughter.

I was surprised, pleasantly, by how the "Evil" Jonathan was introduced, and was saddened by his actions while his crazy-half demon-demented self stalked around Idris.  Clare fixed that little "oogie" problem that arose in "City of Bones" and despite my conscience telling me otherwise I actually started to like a pesky, flamboyant 600 year old Warlock.

Overall… I enjoyed it.  It was long; which even my husband noticed considering I spent all day yesterday glued to my Kindle, but at least when it finally came to the end, I actually got a well thought out ending, complete with fireworks and nifty bright pink drinks.

The Clave learned a lesson, The Downworlders and Shadowhunters learned tolerance, and a certain Vampire finally grew into his own shoes.

Who knew I would walk away from these books having learned something…. the most important thing…If someone ever offers you an "Herbal Drink" while your pregnant…kindly decline…and then find the closest exit.

Happy Demon Hunting…. now… what in the world do I read next?