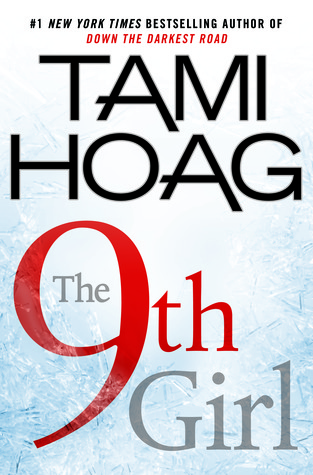 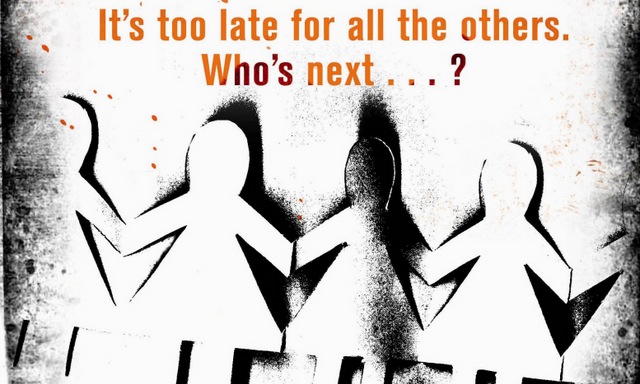 “You must be new,” Liska said. “Wait until we’re un here eating egg salad sandwiches while Doc scrapes the maggots off a severed head.” 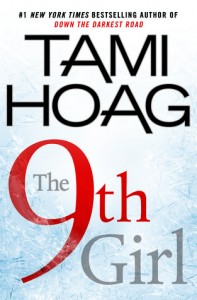 90% of the time I start my reviews off with a personal story. I find it’s a great way to establish community with my readers. But today that is not the case. Today I am going to start by telling you why I decided to read and review Tami Hoag’s “The 9th Girl.”

Unlike most of you (that will decided to pick up this book) I have never read a Tami Hoag novel. I own all of them, for no other reason than I have a friend that lives and dies by Hoag’s words, but until her publicist contacted me asking if I would take a look…the idea of reading any of them (in the relative near future) was pretty much at ground level zero.

The truth of the matter is, I just don’t have the time to read a hand load of novels just so I can review one random one in the middle of the pack. I have over 200 books waiting (not so very patiently) on my review TBR, to stop in the middle for the sole purpose of binge reading a series just to review one doesn’t make a lot of sense. But, as a person who doesn’t like burning bridges, I agreed, deciding to approach this novel from an entirely different angle.

The angle? To see if it’s possible to pick up a Hoag novel (having not read any previously) and successfully follow along.  Could I, having skipped books 1-3 in this series, establish an emotional relationship with the characters? Would I care at all about the story, if I had no connection to the past? Could this book ultimately stand alone? Or did it need the crutch of its predecessors?

The answer, I have to admit…shocked me.

“Kovac had seen more dead bodies than he could count: Men, women, children; victims of shootings, stabbings, strangulations, beatings; fresh corpses and bodies that had been left for days in the trunks of cars in the dead of summer. But he had never seen anything quite like this . . . “

On a frigid New Year’s Eve in Minneapolis a young woman’s brutalized body falls from the trunk of a car into the path of oncoming traffic. Questions as to whether she was alive or dead when she hit the icy pavement result in her macabre nickname, Zombie Doe. Unidentified and unidentifiable, she is the ninth nameless female victim of the year, and homicide detectives Sam Kovac and Nikki Liska are charged with the task of not only finding out who Zombie Doe is, but who in her life hated her enough to destroy her. Was it personal, or could it just have been a crime of opportunity? Their greatest fear is that not only is she their ninth Jane Doe of the year, but that she may be the ninth victim of a vicious transient serial killer they have come to call Doc Holiday.

Crisscrossing America’s heartland, Doc Holiday chooses his victims at random, snatching them in one city and leaving them in another, always on a holiday. If Zombie Doe is one of his, he has brought his gruesome game to a new and more terrifying level. But as Kovac and Liska begin to uncover the truth, they will find that the monsters in their ninth girl’s life may have lived closer to home. And even as another young woman disappears, they have to ask the question: which is the greater evil–the devil you know or the devil you don’t?

Now, before I dive into the intricacies of characters, connections and the fate of reading a book from the middle of a series, I want to talk about the plot. Like most great suspense novels, “The 9th Girl” is overflowing with mystery, twists, and handful of artfully penned disfigured corpses. It is also a product of its environment. Meaning there is more than one plot line to sort through at once. However there is one very significant thing that sets Hoag’s “multiply story lines” apart from the others I’ve read. Not knowing what is significant and what is filler. So instead of guessing the killers identity 50 pages in, I had to collect ALL of the information, weave them together and THEN try to dissect them.

The result…I still got it wrong.

Which actually made me quite happy. I WANT to be surprised. I WANT to be strung along with the police, the families, and all of the gawking media outlets. I WANT to gasp and be outraged right along with the characters, and Hoag delivered that. The “way” in which the overall concept was built remained generic and formulaic (1. Murder 2. Investigation 3. Bump in the road 4. Killer’s perspective 5. The end.) but the way in which it was delivered showed Hoag’s maturity and ingenuity in what she DID or DID NOT deem worthy to present to her audience.

I KNEW the formula, yet I remained engaged.

And the moment I realized I was engaged, was the moment I realized it didn’t matter that I was reading a book from the middle of a series. I cared about the characters inside this novel. I was heartbroken for some, disgusted by others. Past cases, were exactly that…past, and ultimately had no bearing on my understanding of what was going on inside this novel. Relationships seemed natural, flitting across the page with easy and comfort. Soothing my instinctual feeling that reading this book was wrong.

In the end…it was just another (stand alone) psychological thriller, with amazing attention to detail, just the right amount of humor, and enough heart to make the story sink its teeth into you. I didn’t need to backtrack. I didn’t need to research. All I needed to do was kick back and take it all in.

Which (to me) is the sign of a successful novel.

That said…I actually DO recommend you read novels 1-3 first. Not because it’s necessary, but because I have a feeling they will be just as entertaining as this one was. And, since most of you read for fun (not work) adding a few more books to your list isn’t such a big deal.

So where does this leave my thoughts overall? In a pretty happy place.

Good book. Interesting story. Captivating characters. If you are a thriller/mystery buff…take a chance. Apparently Hoag IS (as some may say) all that and a bag of chips.

Happy reading me fellow Kindle-ites and remember: Listening is only the beginning. Understanding is what matters.