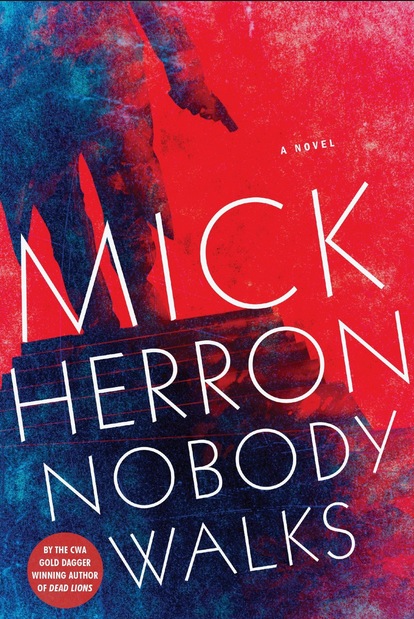 Nobody Walks by Mick Herron

Tom Bettany is working at a meat processing plant in France when he gets a voicemail from an Englishwoman he doesn’t know telling him that his estranged 26-year-old son is dead–Liam Bettany fell from his London balcony, where he was smoking dope. Now for the first time since he cut all ties years ago, Bettany returns home to London to find out the truth about his son’s death. Maybe it’s the guilt he feels about losing touch with his son that’s gnawing at him, or maybe he’s actually put his finger on a labyrinthine plot, but either way he’ll get to the bottom of the tragedy, no matter whose feathers he has to ruffle. But more than a few people are interested to hear Bettany is back in town, from incarcerated mob bosses to those in the highest echelons of MI5. He might have thought he’d left it all behind when he first skipped town, but nobody really just walks away.

1.2   The crematorium was single-storey, stucco-clad, with a high chimney. On one side creeping plants swarmed a cane trellis that bordered an array of small gardens divided by hedges. Japanese stones neighboured ornamental ponds and bonsaid trees peered from terracotta pots. Other patches echoed formal English styles, orchards, terraced rosebeds, in any of which you might strew the ashes of the departed, supposing the deceased had expressed a preference.            Bettany imagined Liam saying When I’m dead, scatter me on a Japanese garden. Not in actual Japan. Just anywhere handy.            A mild English winter was turning chill, but all that remained of the morning’s frost was a damp smudge on the pavements. The imprints of vanished leaves were stamped there too, like the work of a graffiti artist who’d run out of things to say.            Bettany’s once-blond shaggy hair was now streaked grey, like his ragged beard, and while his eyes were strikingly blue, their expression was vague. His hands, large and raw, were jammed in the pockets of a cheap raincoat, and he rocked slightly on feet cased in work-boots that had seen better days. Under the coat he wore jeans, a long-sleeved crew-neck tee and a zippered top. These were the spare clothes from his duffel bag, but three days’ wear had taken their toll. The duffel itself he’d abandoned in a bin, he couldn’t remember which side of the Channel. For all the hours he’d spent on buses, he’d managed little sleep. His only conversation had been a brief exchange on the ferry, when a French trucker lent him the use of a phone charger.            His first stop on reaching London had been Hoxton Police Station.            Detective Sergeant Welles, once located, had been sympathetic.            “I’m sorry for your loss.”            Bettany nodded.            “Nobody seemed to know where you were. But there was an idea you were out of the country. I’m glad you got back in time.”            Which was how he discovered the cremation was taking place that morning.            He’d sat in the back row. The chapel of remembrance was quarter-full, most of the congregation Liam’s age, none of them known to him, but an introduction contained a familiar name, Felicity Pointer. Flea, she’d called herself on the phone. She approached the lectern looking twenty-five, twenty-six, brunette and lightly olive-skinned, wearing black of course. Hardly looking at the assembled company, she read a short poem about chimney sweeps, then returned to her seat.            Watching this, Bettany had barely paid attention to the main object of interest, but looking at it now he realised that what he’d been feeling these past three days was not grief but numbness. A pair of curtains provided the backdrop, and behind them the coffin would soon pass, and there the remains of his only son would be reduced to ash and fragments of bone, to the mess of clinker you’d find in a grate on a winter’s morning. Nothing of substance. And all Bettany could make of it was an all-consuming absence of feeling, as if he was indeed the stranger his son had made of him.            He rose and slipped out of the door.            Waiting by the trellis, it struck him that it was seven years since he’d been in London. He supposed he ought to be noticing differences, things being better or worse, but he couldn’t see much had changed. The skyline had altered, with new towers jutting heavenwards from the City, and more poised to sprout everywhere you looked. But that had always been the case. London had never been finished, and never would be. Or not by dint of new construction.            Seven years since London, three of them in Lyme. Then Hannah had died, and he’d left England. Now Liam had died, and he was back.            Welles had given him a lift here. There might have been a hidden agenda, pump the father for information, but Bettany had none to offer and the flow had gone the other way. How it had happened, for instance. Up through France, across the choppy Channel, Bettany hadn’t known the how. Of the various possibilities some kind of traffic accident had seemed most likely, Liam driving too fast on a fog-bound stretch of motorway, or a bus mounting the pavement, Liam in the wrong place. He could have called and spared himself conjecture, but that would have been to make imagination fact. Now he learned that there had been no cars involved, no buses. Liam had fallen from the window of his flat.            “Were you in close contact with your son, Mr. Bettany?”            “No.”            “So you wouldn’t know much about his lifestyle?”            “I don’t even know where he lived.”            “Not far from here.”            Which would make it N1. Not somewhere Bettany was familiar with. He gathered it was trendy, if that word was used any more, and if it wasn’t, well then. Cool. Hip. Whatever.            Had Liam been hip? he wondered. Had Liam been cool? They hadn’t spoken in four years. He couldn’t swear to any aspect of his late son’s life, down to the most basic details. Had be been gay? Vegetarian? A biker? What did he do at weekends, browse secondhand shops, looking for bargain furniture? Or hang around the clubs, looking to score? Bettany didn’t know. And while he could find out, that wouldn’t erase the indelible truth of this particular moment, the one he spent outside the chapel where Liam’s body was being fed into the flames. Here and now, he knew nothing. And still, somehow, felt less.            Overhead, a stringy scrap of smoke loosed itself from the chimney. Then another. And now here came the rest of it, billowing and scattering, a cloud for only a moment, and then nothing, and nowhere, ever again.