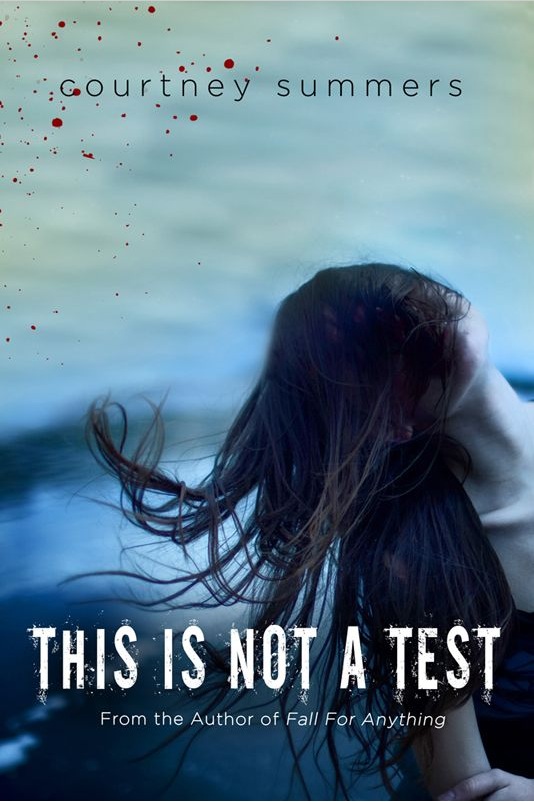 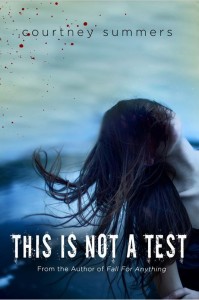 One of my favorite shows on television right now is “The Walking Dead” not necessarily because of the zombies (though I love a big batch of rotting angry flesh as much as the next girl) but because of the moral dilemmas the characters face while on their journey for survival.

Would you be willing to sacrifice someone for the sake of yourself?

“This is Not a Test” by Courtney Summers (author of “Fall for Anything” and “Cracked Up To Be”) dared to ask those questions.  She also dared to answer them.

“It’s the end of the world. Six students have taken cover in Cortege High but shelter is little comfort when the dead outside won’t stop pounding on the doors. One bite is all it takes to kill a person and bring them back as a monstrous version of their former self. To Sloane Price, that doesn’t sound so bad. Six months ago, her world collapsed and since then, she’s failed to find a reason to keep going. Now seems like the perfect time to give up. As Sloane eagerly waits for the barricades to fall, she’s forced to witness the apocalypse through the eyes of five people who actually want to live. But as the days crawl by, the motivations for survival change in startling ways and soon the group’s fate is determined less and less by what’s happening outside and more and more by the unpredictable and violent bids for life—and death—inside. When everything is gone, what do you hold on to?”

This is NOT your everyday zombie apocalypse story.  It does have it’s moments of eww…

“I slam the crowbar into the man’s shoulder.  It doesn’t stop him.  The man grips ***’s shoulders, pulls him down and bites into the first piece of flesh his mouth can find. ***’s cheek.  I could fool myself into thinking it’s a kiss, but then the skin separates from ***’s face and it’s just red, a river of red dragging down his face, hanging flesh, and the dead man pulls at it with his teeth, annoyed it’s still attached to the person it belongs to.”

but it’s not the focus of the story. (Hell, I don’t even remember if Summers explains how the world became overrun with the attitudinally challenged brain munchers.) Instead it’s about Sloane and her insistence on leaving the “here and now” in search of inner peace.

Sloane and her sister Lily are parental abuse victims. (I’m talking hardcore, you have to miss school for 2 weeks type abuse.) And it’s this fact alone that ignites the plot for the entire novel.  See, Lily took out. (This isn’t a spoiler, it’s a fact noted on page 1.)  She turned 18, grabbed her crap and hit the highway. (Never looking back.) For her (Lily that is) this is great. Freedom at last! *woohoo*, but for Sloane it was a death sentence.

For years Lily insisted they depend only on each other.  Don’t form attachments, do not tell our secret.  It’s me and you. Period.  As a result Sloane has no friends. No loved ones, and a Grand Canyon sized hole of abandonment issues settled somewhere between her heart and her brain. So she chooses not to live. (Simple as that.) Unfortunately, the people who now surround her (especially Rhys) have other plans. All for one and one for all. (Almost.)

It’s Sloans refusal to let people in that makes the read so entrancing.  People generally cling to others during times of crises but Sloane does the opposite.  She is snarky on purpose.  Removes herself from any and all “survival” conversation or decisions.  Deliberately puts herself in harm’s way and refuses to be swayed by anything but the suicide note in her pocket.

Her detachment from reality makes her moral compass a little wobbly which brings us back to the original questions.

Would you be willing to sacrifice someone for the sake of yourself?

At what point do you stop trusting the people around you?

When do you decided living just isn’t enough?

Courtney Summers surprised me with her answers. Even more with her ability to write a zombie novel that has heart.

The story is interesting.  The writing is engaging, and the last several chapters will have your fist pumping and jaw dropping.

I say take a chance and let her gritty take on self-destruction seduce you too.

Hardcore zombie-ites need not apply, but lovers of the human psyche get in line.

Happy reading my fellow Kindle-ites and remember: “The thing that is really hard, and really amazing, is giving up on being perfect and beginning the work of becoming yourself.” – Anna Quindlen