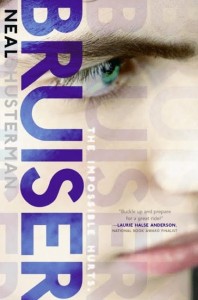 Every once and a while you run across an author that strikes a cord in you; strums the strings to your heart… makes your pulse quicken.  For me that person is Neal Shusterman.  A few months ago I read his novel “Unwind” and was blown away.  Shusterman has a way with story telling that goes beyond the lines of unique, to me they are… enlightening. Most novels teach a lesson, (this I have learned in my 20 something odd years of reading,) but very few books teach you how to live.  “Bruiser” (in Shusterman’s own words) was supposed to be a book about a boy with the ability to take away his loved ones pain, but instead it was a tale about understanding, forgiveness, addiction, denial, loss, and sacrifice. “Bruiser” was an artistic lesson in how to cope with the unimaginable.

Brewster is a loner, but not just any loner, he is Bronte’s loner. Voted “Most Likely To Go To Jail” is just one of his shining traits, and Tennyson (Bronte’s brother) is none to happy about his sis’s sudden love connection.  Hoping to rectify the situation,  Tennyson does what he does best… throws his weight around and threatens Brew, but what Tennyson doesn’t know is that it’s already to late to turn back.  See… Brew has this “gift,” he has the ability to take on the pain of those he loves, and SURPRISE he loves Bronte.  The kicker? The more he hangs around Bronte, the more he cares, and before he knows it, he’s knee deep in bruises and hell bent on keeping his secret.  Will Brew’s gift finally destroy him? Will Tennyson ever realize that you can’t grow if you don’t live and what about Bronte? Will she ever open her eyes and see the fate that is two feet in front of her face?

There is no question that Shusterman is a terrific story teller, his plots, his characters… they are (more often than not) flawless, so instead of focusing on his writing ABILITY, I want to focus on the way he chose to tell this particular story.  The easy take would have been a singular narrative, or even duel narration, but apparently that was just too damn easy, instead Shusterman decided to tell this story through the eyes of 4 different characters (Brewster, Bronte, Tennyson, & Cody – Brew’s little brother) That fact alone is commendable, but even THAT pales in comparison to the WAY in which he wrote the chapters.  Tennyson’s chapters were aggressive, self loathing and at times bitter. Bronte was written from the side of naivety and compassion. Cody was tapped with fear and Brewster’s chapters veered VERY far to the left and were written as poetry.  Talk about flexing the literary biceps.  The suspense in the book carried easily from character to character and in the end I found myself once again (Thanks Neal) crying like a 3 year old that lost her dolly.

Overall? “Bruiser” is one of the most “emotionally” moving books I have read in quite some time, and well worth the moola I threw down for it.  If you have had the opprotunity to read any of Neal’s work in the past and enjoyed it, I assure you… this one will not dissapoint, for those of you that have yet to venture into any of Shusterman’s alternative worlds, what are you waiting for?

One thought on “You Are Breaking My Heart”