I know what you are thinking, “Why in the hell am I posting these?!” Truth be told? I have no idea. Maybe I think they cool. Maybe I am tired of watching princess movies with my 3 year old daughter and this is my passive aggressive way of venting about it. Maybe (and this is the most likely of the batch) I am completely freaking psychotic! (insert maniacal giggle.)

Regardless…I had this overwhelming urge to share these, and by God when I get the urge to leave my morals and good judgement at the door, I go for it.

There was once a fairy tale land, which broke out in a virus that turned even the most respectable princess into bloodthirsty zombies.

Therefore, Snow White, (and all of the other slightly nauseating princesses) never found her Mr Right, because they ate all the candidates.

Never fear though, the Zombie princesses are not gone for good, as of about 20 minutes ago they were still raging in their kingdoms. 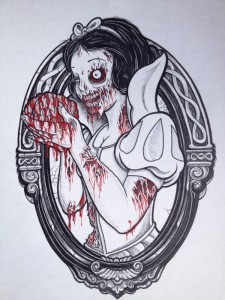 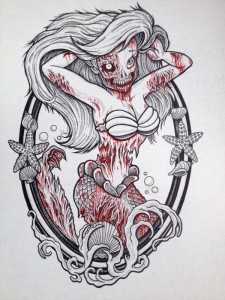 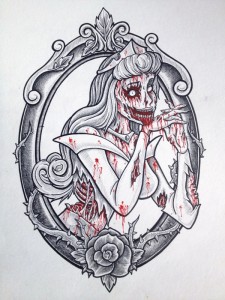 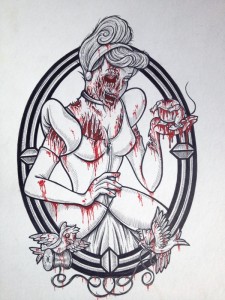 Ok, I couldn’t do it… I couldn’t be completly random so here are a few good zombie books to check out.

“The end was near.” —Voices from the Zombie War

The Zombie War came unthinkably close to eradicating humanity. Max Brooks, driven by the urgency of preserving the acid-etched first-hand experiences of the survivors from those apocalyptic years, traveled across the United States of America and throughout the world, from decimated cities that once teemed with upwards of thirty million souls to the most remote and inhospitable areas of the planet. He recorded the testimony of men, women, and sometimes children who came face-to-face with the living, or at least the undead, hell of that dreadful time. World War Z is the result. Never before have we had access to a document that so powerfully conveys the depth of fear and horror, and also the ineradicable spirit of resistance, that gripped human society through the plague years.

Ranging from the now infamous village of New Dachang in the United Federation of China, where the epidemiological trail began with the twelve-year-old Patient Zero, to the unnamed northern forests where untold numbers sought a terrible and temporary refuge in the cold, to the United States of Southern Africa, where the Redeker Plan provided hope for humanity at an unspeakable price, to the west-of-the-Rockies redoubt where the North American tide finally started to turn, this invaluable chronicle reflects the full scope and duration of the Zombie War.

Most of all, the book captures with haunting immediacy the human dimension of this epochal event. Facing the often raw and vivid nature of these personal accounts requires a degree of courage on the part of the reader, but the effort is invaluable because, as Mr. Brooks says in his introduction, “By excluding the human factor, aren’t we risking the kind of personal detachment from history that may, heaven forbid, lead us one day to repeat it? And in the end, isn’t the human factor the only true difference between us and the enemy we now refer to as ‘the living dead’?”

Note: Some of the numerical and factual material contained in this edition was previously published under the auspices of the United Nations Postwar Commission.

“I found ‘Patient Zero’ behind the locked door of an abandoned apartment across town. . . . His wrists and feet were bound with plastic packing twine. Although he’d rubbed off the skin around his bonds, there was no blood. There was also no blood on his other wounds. . . . He was writhing like an animal; a gag muffled his growls. At first the villagers tried to hold me back. They warned me not to touch him, that he was ‘cursed.’ I shrugged them off and reached for my mask and gloves. The boy’s skin was . . . cold and gray . . . I could find neither his heartbeat nor his pulse.” —Dr. Kwang Jingshu, Greater Chongqing, United Federation of China

“‘Shock and Awe’? Perfect name. . . . But what if the enemy can’t be shocked and awed? Not just won’t, but biologically can’t! That’s what happened that day outside New York City, that’s the failure that almost lost us the whole damn war. The fact that we couldn’t shock and awe Zack boomeranged right back in our faces and actually allowed Zack to shock and awe us! They’re not afraid! No matter what we do, no matter how many we kill, they will never, ever be afraid!” —Todd Wainio, former U.S. Army infantryman and veteran of the Battle of Yonkers

“Two hundred million zombies. Who can even visualize that type of number, let alone combat it? . . . For the first time in history, we faced an enemy that was actively waging total war. They had no limits of endurance. They would never negotiate, never surrender. They would fight until the very end because, unlike us, every single one of them, every second of every day, was devoted to consuming all life on Earth.” —General Travis D’Ambrosia, Supreme Allied Commander, Europe

The Zombie Survival Guide is your key to survival against the hordes of undead who may be stalking you right now. Fully illustrated and exhaustively comprehensive, this book covers everything you need to know, including how to understand zombie physiology and behavior, the most effective defense tactics and weaponry, ways to outfit your home for a long siege, and how to survive and adapt in any territory or terrain.

1. Organize before they rise!
2. They feel no fear, why should you?
3. Use your head: cut off theirs.
4. Blades don’t need reloading.
5. Ideal protection = tight clothes, short hair.
6. Get up the staircase, then destroy it.
7. Get out of the car, get onto the bike.
8. Keep moving, keep low, keep quiet, keep alert!
9. No place is safe, only safer.
10. The zombie may be gone, but the threat lives on.

Don’t be carefree and foolish with your most precious asset—life. This book is your key to survival against the hordes of undead who may be stalking you right now without your even knowing it. The Zombie Survival Guide offers complete protection through trusted, proven tips for safeguarding yourself and your loved ones against the living dead. It is a book that can save your life.

Once on the fringes of horror, the “zombie apocalypse,” has become one of the most buzzworthy genres in popular culture. Now, in Day by Day Armageddon, J.L. Bourne delivers an intelligent, gripping thriller that will leave both new and die-hard zombie fans breathless.

Sporadic news reports indicate chaos and violence spreading through U.S. cities. An unknown evil is sweeping the planet. The dead are rising to claim the Earth as the new dominant species in the food chain.This is the handwritten journal depicting one man’s struggle for survival. Trapped in the midst of global disaster, he must make decisions; choices that ultimately mean life, or the eternal curse to walk as one of them. Enter if you will into his world. The world of the undead.

In a moment of pure chaos, the majority of the Earth’s population became the walking dead. One man promises to unveil the truth.

When journalist Jacob Plummer is bitten by one of the undead he turns to the written word not only to ease the pain of change, but to reveal a truth that could spare the world from extinction.

As Jacob attempts to reveal the conspiracy behind the virus he fights off the undead masses to save the planet from a collision with entropy.