Skip to content
Happy Friday everyone!!!  Today’s guest review is brought to you by the very lovely, (incredibly talented,) Heather Wardell.  Most of you should be fairly aquainted with her by now, (I have reviewed several of her books,) but if not, take the time to do so. She has written 5 novels including “Go Small or Go Home” “Seven Exes are Eight too Many” and the awe inspiring “Planning to Live,” but more importantly she makes playing in an orchastra sound like fun. Happy Reading!
Click image for details
Guest Review: Ender’s Game 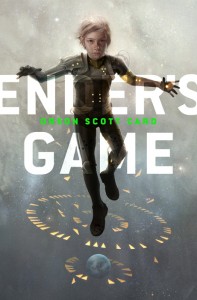 Andrew Wiggin, called Ender because his sister couldn’t pronounce Andrew when she was young, was born to be a military genius.  Literally: his brother was considered too aggressive, his sister too passive, so his parents were required to have a third child in the hopes that Ender would become the brilliant strategist and commander needed to save the earth from the aliens, insectoid nightmares known as ‘buggers’, that had attacked the Earth twice and were no doubt heading back to finish the job.

Ender, and other children who are also potential commanders, are sent off-Earth to the Battle School floating in space, where they learn how to fight and how to win a fight so definitively that nobody will fight them again. Since they’re young children, their training takes the form of games and mock battles. Will Ender grow strong enough and smart enough to save Earth? If not, will some other child pick up the slack or is Earth doomed?

I read this book for the first time back in high school. (Dinosaurs were no longer roaming the earth then, before anyone says it, but we were still wearing black armbands in their memory.) I remember finishing it on break at my lifeguarding job, and putting it down on the desk and staring at it. The world of the book was so real, and the way the book ended resonated with me so deeply, that I didn’t quite know what to do with myself. It’s one of my best and clearest memories of what a book can do to a reader. I don’t write science fiction but I still think about this book and try to give my readers the same sort of experience.

So I was nervous when I decided to re-read my battered old paperback copy in preparation for reading its immediate sequel, published in 2008 but only recently discovered by me, “Ender in Exile”. (There are a number of “here’s the story from another character’s viewpoint” books in Ender’s world, which eventually began to feel more like “the author needs the money” than “the story needs to be retold” to me.) What if I didn’t still connect with it in the same way? I didn’t want to sully my memory of one of the most moving books I’d ever read.

Fortunately, I didn’t. I read now as a writer/reader instead of a pure reader, and so there were some parts I would have liked to see expanded upon, some places where I wanted to be more in Ender’s mind instead of just observing what he did, but the story still sucked me in.

Poor little Ender, only six years old, up in that Battle School all alone while much older children are far too willing to show him how much they hate (and envy and fear) him… the bugger menace hanging over everyone’s heads… the buzzing sense of “not enough time” to train Ender to be a commander…

I’d love to tell you more about the story but I’d hate to take away your chance at a “put it on the desk and stare at it” moment. Ender’s Game is currently only $4.79 at Amazon’s Kindle Store, and I strongly recommend it.