Good morning all! Today’s guest review is brought to by a VERY talented reviewer/super mod. Though I don’t actually know her name (anonymity is a blessing sometimes) I can tell you that she is making gigantisaurus sized waves all over the book world!

She first started TNBBC (The Next Best Book Club) on Goodreads back in the fall of ’07, and watched it grow from a few members to the largest, most active book group on the site. Her search for The Next Best Book has pushed her out into the world of blogging, tweeting, and facebooking. TNBBC’s focus is on supporting and promoting independent publishers and authors through reviews, interviews, features, giveaways, and author/reader discussions. 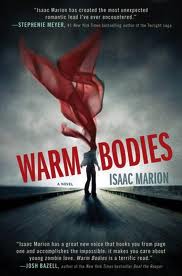 I cannot tell you how I excited I was when I tore open a package from Regal Literary and discovered they had sent me a copy of Isaac Marion’s zombie novel Warm Bodies!

Anything but your typical run-of-the-mill zombie story, Isaac does something that no author (that I’m aware of, at least) has done before… He puts you inside the head of one of the Undead.

Meet R. He does not know how long he has been dead, or what killed him for that matter. He assumes from his body’s slight state of decomposition that he is recently Undead. He has vague, incomplete memories of who he used to be yet he clearly understands what he is now.

Breathing new life into a somewhat tired genre of monsters and mindless villains, Isaac takes a huge risk by spinning R as an entirely likable, and even potentially lovable, character. By giving R the ability to rationalize, while perhaps unable to completely vocalize, his reasons for being who he is and doing what he does, Isaac encourages his readers to take everything they thought they knew about zombies and forget it all…

The zombies in this novel lives surprisingly human-like lives. They have best friends, they get married, they are given kids to look after. Our leading Zombie R and his hive-mates have built a church of sorts, bring their children to school (where they are locked in a ring with a kidnapped human for training purposes) and pair up on hunting expeditions for food. Oh yes, let’s not forget – they eat brains! They are zombies, after all!

On one particular hunting trip, R falls in love with a Living girl named Julie, the girlfriend of the man whose brain he’s just ingested, and makes the decision to wisk her away and keep her safe.

What we are witnessing is the transformation from Zombie to something else entirely. As R spends more time with Julie, he notices changes in his thought processes, he can control his hunger for flesh, and begins to register emotions. He begins to feel… more human.

Isaac introduces “What If”…. What if the plague that caused the dead to rise could be reversed? What if humans and zombies could come together and fight alongside one another to battle an ever greater enemy? What if the Living and the Undead could fall in love?

Part horror story, part love story, Warm Bodies is certain to catch you off guard and have you questioning everything you thought you knew about the zombie apocalypse. It’s sure to stick with you long after you’ve read the last line.

Take a peek at Isaac Marion’s homemade trailer for the novel. His book hits shelves on May 17th, under Atria Books. Go buy it!