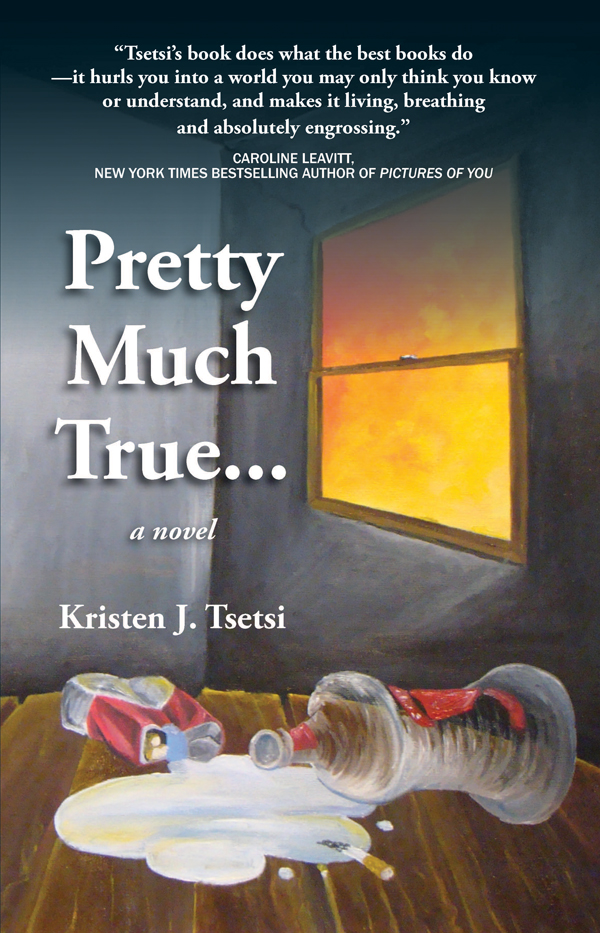 Good Morning Kindle-ites! Way back in 2010 (I say that like it was 10 years ago…sheesh.) I read a book by the very talented Ms. Kristen Tsetsi called “Homefront.” I loved it.  It was gritty, it was raw….it was awesome. Well, last month Kristen emailed me with FANTASTIC news! Her novel was picked up by a publisher and being rereleased to the public under a different title and a new cover. *pats Kristen on the back for a job well done* Anyways, she asked if I would be willing to share all of it’s newness with you, and since it is still one of the best indie books I have read (to date) there was no way I could turn it down. So here it is. The book, an excerpt, and a link to my old review. Enjoy, and Happy Book Birthday Kristen! 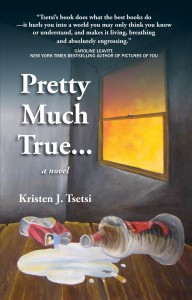 “I smell your shirt sometimes, but not often,” Mia writes, those slurred keyboard strokes the only connection to her deployed boyfriend, whom she sees everywhere and nowhere in their small military town. A former English professor, Mia passes the time working as a cab driver, mulling over the intricacies of her encounters with others who are affected by the war: her dramatic future mother in-law, who eats bad news for breakfast; a charismatic alcoholic who may have been a medic in Vietnam; a pragmatic but secretive longtime Army wife; and a soldier who found a way to stay home. Pretty Much True… is the war story that’s seldom told-the loss and love in every hour of deployment, and a painfully intimate portrait of lives spent waiting in the spaces between.

It’s louder than I expected. One of the chunks lands on the shelf and breaks the plate he bought at the Grand Canyon.

Someone knocks at the door, knock knock knock, has been for what seems like hours. I reach for my coffee, but it’s cold, and when I get up to bring it to the kitchen my head spins. I steady myself on the chair and feel strangely tall, the kitchen is crowded, too small for me. I take a step and Chancey runs underfoot and I kick out, catching his tail. Knock knock knock. I close the mug in the microwave and set the time, watch the glass dish spin around and around and—

I pull the mug from the microwave and it is hot on my palm. I set it on the counter, pick it up by the handle and walk to the door, open it. Denise shoves in and closes the door and walks straight to the living room. Her footfalls stop short.

The cup really is very hot. I set it on the counter and open the refrigerator and stare at white grated shelves, white walls, a wrapped slice of cheese, orange against the stark brightness. I push at the door to the butter bin. Empty.

She stands now in the kitchen entry. I lean in to check the date on a half gallon of milk. Bad.

Bile or something like it floods my throat, fights against being swallowed down.

Denise takes my hand and leads me to the living room. “…no word…,” they say through the small holes on the side of the TV.  Denise asks what this is.

“What did you do to it? The shelves are bare.”

The shelves are bare.

Her nails are rough and scrape into my palm. I pull my hand free and she grabs me again—my wrist, this time—but more gently.

“Is this any way to treat your things?” She smiles, tugs my arm. “Some of them were so beautiful.”

Yes. Beautiful. But it can’t be owned, beauty, can’t be trapped in my lungs and tasted on my breath when I exhale. It’s fleeting, like a silk scarf lost to the wind. An abstract, empty indulgence, so I threw—hurled, really—the geodes, but they wouldn’t break, or even chip. Edges like painted glass, and inside, a cavern of dazzlingly perfect crystals, so perfect I wanted to eat them, wanted to pluck out the individual shards and push them into my eyes. I read somewhere that people are doing that, having garnets of all colors embedded in the whites of their eyes. Eye jewelry. But then, they can’t see it unless they look in a mirror.

And the jade figurine, a bird on a stump with carved flowers—pansies, I think—at its feet. It was heavy. Solid. The petals folded delicately open and the feathers, chiseled so smooth, promised to fan. But what good? I took pleasure in all of it, in decorating, in placing the bird just so next to the old dictionary. Jake enjoyed it, too, putting things here, putting things there. His things, my things. The apartment was ours because our things lived here. The first night, all moved in, we made hot chocolate and sat on the couch and looked at our arrangement of things.

Denise picks up the half of the bird she finds partially hidden under the lowest shelf. “Pretty,” she says. She drops it on the floor and it dents the wood. I look at her feet. She’s standing in rubble. She nudges our things with her toes. Pieces of a painted gourd Jake picked up at an import store. Gray rocks from my Zen garden. Shards of baked clay from the matching pottery jugs we bought at a street fair from a man with red cheeks and blue wool mittens.

Stereo cords coil under the mess and the speakers are on separate sides of the room, one of them upside down, the other facing the wall. The stereo lies face-own in the middle of the room with a split spreading across the case.

She asks where my broom is. My dustpan.

“I’ll find it,” she says, and she does. What’s not broken, she sets on a shelf. What is broken, she sweeps into a pile and dumps in a paper bag. She asks where the cat food is and I tell her I fed him an hour ago—or several hours? today, anyway—and that his water is fresh. “Just checking,” she says, but she shakes the bag of food anyway, calling, “C’mere, kitty.”  He doesn’t, which is unusual, because even when he’s not hungry, he usually does. I ask her if it’s possible he sneaked out when she came in.

“I would have noticed,” she says.

We search the apartment until we find him behind my hamper in the bedroom closet.

“Maybe you scared him.”

I ask her how.

She picks up the bag of broken things and puts it outside the front door. “I wonder, Mia.”

One thought on “Pretty Much True…”