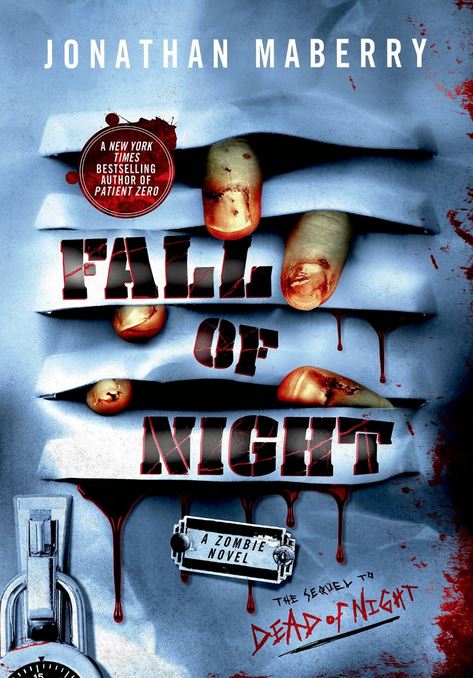 Fall of Night by Jonathan Maberry

The sequel to Dead of Night, bringing back beloved characters Desdamona Fox and Billy Trout as they race against time to quarantine a zombie epidemic while caught in a military strike…Stebbins Little School is full of bodies. It’s unthinkable to Desdemona Fox. Children are sobbing as panicked teachers and neighbors beat down their family members outside of the school…or the things that used to be their family members. Parents don’t eat their children do they? Officers Fox and Hammond, along with journalist Billy Trout, are calling it the beginning of the end. This is the zombie apocalypse. An insane escaped serial killer is infecting Stebbins County with a deadly virus, and now the whole world is watching while Fox, Trout, and the remaining inhabitants of Stebbins fight for their life against…what? The undead? The President and the National Guard are ready to nuke Stebbins, PA off the map and cut their losses. But the infection is spreading and fast. Worse, the scientist who created the virus is missing. It’s a numbers game as the body count rises; Fox has to contain the infected and evacuate the living before it’s too late, and the clock is ticking…Fall of Night, Maberry’s nail-biting sequel to Dead of Night, picks up where the first novel left off—on a wild goose chase for a mad man and the missing scientist who gave him new “un”-life. Chilling, gory, and hair-raisingly scary, Maberry fans won’t be able to read this fast-paced thriller with the lights off.

I am a sucker for Jonathan Maberry’s attitudinally challenged cranium crunchers, so it shouldn’t be that big of a surprise that I am eagerly awaiting the sequel to “Dead of Night.”

Not only are Desdamona and Billy AMAZING characters but they are amazing character stuck inside of the most precarious of situations. The zombie apocalypse. Duh.

Oh, THAT wasn’t enough to sell you? FINE. Be that way. I’ll pull out the big guns…

“Parents don’t eat their children do they?”

If you haven’t had the pleasure of reading Maberry I suggest you do so immediately. He is a brilliant descriptive writer and an expert at suspenseful dialogue. BOTH very valid reasons for why I can’t wait for this book. Even if it didn’t involve zombies. Which I love. A lot. Almost absurdly. God I need a shrink.

Anyways, THIS is what I am waiting for.